Professor Quirinus Quirrell is a Harry Potter minifigure introduced in 2001. He was a Professor at Hogwarts who taught Muggle Studies, and later Defence Against the Dark Arts in Harry's first year.

Professor Quirinus Quirrell claimed he had received his turban from an African prince for dealing with a zombie, but this turned out to be a lie. He met Lord Voldemort ten years before Harry Potter's first year in Hogwarts in an Albanian forest after he tried to use a killing curse on Harry Potter. Lord Voldemort's body had been destroyed instead and only his soul remained. Lord Voldemort then decided to use Quirrell as a host, manifesting himself on the back of Quirrell's head. Quirrell claimed he met vampires there to cover up what really happened. He tried to kill Harry when he was on his broomstick in his first Quiddich match, but failed when he broke eye contact with him, which was necessary for the spell. Lord Voldemort was hidden under Quirrell's turban, allowing Voldemort to give Quirrell direction without being seen. In the chamber that held the Mirror of Erised that led to the Sorcerer's Stone, Harry killed Quirrell and unleashed Lord Voldemort's soul back into the world. Because of Harry's mother's sacrifice, Harry was protected by her love, and when he touched Quirrell it burned him and eventually turned Quirrell to dust, leaving only his empty clothes.

Quirrell is the final Boss in Year 1 in LEGO Harry Potter Years 1-4 and a playable character in the game. Once you reach the final area, the Boss begins. Voldemort/Quirrell will have three hearts, when you start you'll instantly see fire everywhere, so you're trapped. First Voldemort/Quirrell will destroy some parts of the floor and fire will come up. He begins shooting fireballs from his wand, so dodge them quickly and wait until he casts a green skull-like spell (a variation of Verdimillous Maxima) at you. Now you need to use Wingardium Leviosa to cast it back at him to knock him out. When he is knocked out you need to jump over the crack in the floor and have Harry touch him to burn him. Once he loses health he will force you back and destroy even more parts of the ground. Keep dodging until you get another heart down. Now on the final round he destroys almost the entire floor that there's only two tiny platforms to jump on. Keep dodging the fire then send the skull spell back at him. Then touch him for the final time to beat him and complete Year 1. 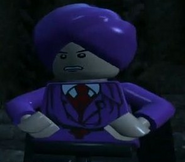 Professor Quirrell in the video game 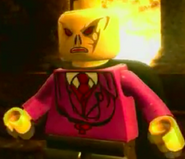 Quirrell with Voldemort's head in the video game

Quirrell getting ready to take off his turban 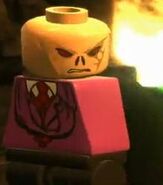 Quirrell without his arms 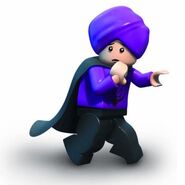 Voldemort back on Quirell's head (2018 redesign)