Severus Snape, also referred to as Professor Snape and The Half-blood Prince is a minifigure from Harry Potter introduced the 2001. He taught Potions at Hogwarts and was head of Slytherin House. He was originally thought to be an antagonist in the series, however, in the final installment of the franchise, Harry Potter and the Deathly Hallows, it was revealed where his true loyalties lay.

To date, Professor Snape has appeared as five different variations:

In The Philosopher's Stone and The Chamber of Secrets sets, Snape appears with a glow-in-the dark coloured head, and grey hands. He is clothed in black robes, with a printed dark purple pattern on the torso and legs and has a black cape. Snape's hair piece is black, shoulder length and parted in the middle. In 4733 The Dueling Club, Snape comes equipped with a dark grey wand.

In The Prisoner of Azkaban, Snape's appearance is slightly altered, where the purple printing on Snape's torso and legs is opaquer but of the same design, and he retains the same head and hair pieces.

In The Order of the Phoenix subtheme, Snape was completely redesigned to have a flesh-coloured head and hands, and a different purple printed pattern on his torso. His legs and cape were made plain black. The only piece to remain the same was Snape's hair piece. This was the first Snape minifigure that didn't have a glow-in-the dark head.

In the 2010 4842 Hogwarts Castle, Snape was once again redesigned, with a different flesh-coloured head, hair, and torso piece. In the prototype version at Toy Fair showed him with a purple-printed torso, but the final version is actually black, with the same printing as the variation released under The Order of the Phoenix sub-theme, except with grey lines, not purple lines. Once again, Snape has plain black legs and a black cape, along with flesh-coloured hands, but comes with a hairpiece new in 2010. In his 2010 appearance, Snape is equipped with a black wand.

While not actually Professor Snape himself, a Boggart (a shape-shifting magical creature which takes the form of the viewer's worst fear) impersonating Snape appears in 4752 Professor Lupin's Classroom after Neville Longbottom cast the Riddikulus charm on it, resulting in what appears to be the Professor in Neville's grandmother's clothing. The head, hair and hand pieces of this variant are consistent with the Professor Snape Minifigures appearing in The Philosopher's Stone and The Chamber of Secrets, but the torso and leg pieces are sand-green, and the torso has printing on it representing Neville's grandmother's clothes, which includes a picture of a stuffed cat on it. A new version of this figure is being reintroduced in 5005254 Harry Potter Minifigure Collection.

Professor Severus Snape was a Death Eater who became a double agent and a member of the Order of the Phoenix, headed by Albus Dumbledore. Although many believed Snape was actually working for Voldemort, Dumbledore trusted him for reasons no one could figure out.

He began teaching Potions at Hogwarts, although he always wanted the post of Defence Against the Dark Arts. As a teacher, he and Harry harbored a fierce hatred of each other.

After Lord Voldemort's return in 1995, Albus Dumbledore ordered him to go back to Lord Voldemort and act as a spy for him. Voldemort accepted Snape back, believing that Snape had been gathering valuable information for him at Hogwarts when he was away.

In the 1995-1996 school year at Hogwarts, Severus remained in his post as Potions Master. In winter, Snape was appointed by Albus Dumbledore to teach Harry Potter Occlumency.

In 1996, Narcissa Malfoy, accompanied by her sister, Bellatrix Lestrange, went to Severus's House in Spinner's End. Narcissa came to ask for help, she asked in Severus could "look over" Draco. Narcissa and Severus made the Unbreakable Vow.

In 1996-1997 school year at Hogwarts, Severus Snape was assigned the post of Defence Against the Dark Arts teacher, the job which he had been applying for since he first joined the Hogwarts staff.

In 1997, Severus Snape was appointed Headmaster at Hogwarts after the Death Eaters invaded the Ministry of Magic and took control of it.

In May 1998, The Battle of Hogwarts broke out. Which resulted in Lord Voldemort killing Severus over the Elder Wand, a wand which was believed to be unbeatable. In his final moments, Harry Potter came across Snape, and Snape showed Harry memories of his past, revealing that because of his deep love of Lily Evans, Harry's mother, he had been acting under Albus Dumbledore's orders the whole time and had been protecting Harry, but because of his hatred for James Potter, Harry's father, Snape abused and tormented Harry throughout the time he knew him. 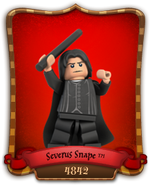 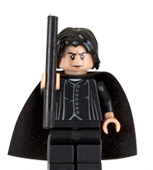 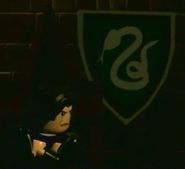 Snape in the video game, as seen here as Head of Slytherin House. 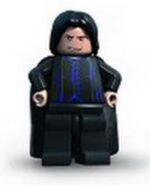 Snape's appearance in the video games.