Professor Pomona Sprout is a minifigure from the Harry Potter theme.

Professor Pomona Sprout is the Herbology teacher at Hogwarts and is head of Hufflepuff house. To date, Sprout has appeared in LEGO Harry Potter: Years 1-4, as well as the 2011 set, 4867 Hogwarts. In LEGO Harry Potter The Videogame, her character token can be found in the Hogwarts greenhouse. Some special features of this character are; although she is not a student, Sprout has access to the Hufflepuff common room, because she is head of this house, she knows all the spells except for dark magic, she also doesn't need to put on mandrake earmuffs because she always has them on, she has the ability to dig like a dog because she carries a shovel.

The Sprout minifigure has a face similar to Professor McGonagall's but with a smile. Like the senior minifigures, Sprout has wrinkly lines on her face. She has a white-tan hat and her glasses and earmuffs from the video game are omitted on her real minifigure. She has a dress, so she has no minifigure legs like McGonagall and a few others. She has white skin and pockets on her dress. Like in the game, her torso has about two flowers on it. She has a brown wand like most minifigures.

In LEGO Harry Potter: Years 1-4, in a different design as the minifigure because the game was released before the real Sprout toy was. In the game, she wears earmuffs on the Mandrake level (and strangely other Herbology lessons also) and has lipstick. Unlike her minifigure, she doesn't have wrinkles on her game model. In the game, she appears in Harry Potter and the Philosopher's Stone and Harry Potter and the Chamber of Secrets. Unlike the movie and book, Sprout teaches the "Lumos Solem" spell. In the movie, this is only mentioned in the Devil's Snare scene where Hermione gets Ron out of the snare. Also in the game she has glasses unlike in the movie or the minifigure.

Sprout on display at Toy Fair 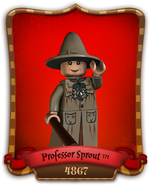 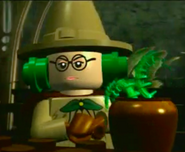 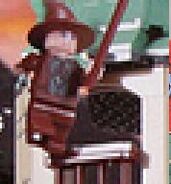