The Pteranodon (Ter-an-oh-don) is an Animal minifigure. Since the first Pteranodon was released in 1997 in DUPLO, various incarnations and versions of the Pteranodon have been released.

The first Pteranodon figures appeared in 1997 in the preschool targeted DUPLO line. The figure was part of DUPLO's new Dino theme, and was only one single piece with no movable parts.

A smaller version of the figure was also released as a baby Pteranodon.

2008 saw the reintroduction of Duplo's Dino theme, with a new Duplo Pteranodon figure which was similar to the first one, with new printings.

2000 came the release of the Adventurers sub-theme Dino Island, which featured the first Pteranodon minifigure made specifically for LEGO Systems sets. Pteranodons were released in red, orange, dark orange, and tan. It consisted of a single piece. It also appears in various video games. LEGO Island 2 features it as a mount unlocked after completing Adventurer's Island. In the LEGO Island Extreme Stunts video game, it can be seen flying around Space Mountain. In LEGO Racers 2 , it can be seen flying on Dino Island. 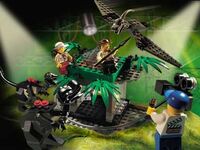 A new Pteranodon was released in 2001 with the Studios subtheme Jurassic Park III, with the set 1370 Raptor Rumble Studio. This version of the animal was made of common parts mostly, but speciallised Dinosaurs pieces are used for the head.

With the release of the Dino Attack theme in 2005, came yet another brand new version of the Pteranodon. The new figure was made of all new parts and came in only black with a green underbelly. It consisted of six separate pieces.

A new, more realistically colored and proportioned version of the Pteranodon has been released in the Dino theme. They were released in 2012. Interestingly, these Pteranodons are to-scale with a minifigure.

Two versions have been released, a dark tan/dark red one and a dark green/sand greenish tan one.

The pteranodon appears in LEGO Jurassic World and did many of the same things that pteranodon did in The Lost World: Jurassic Park, Jurassic Park III and Jurassic World. Like the other dinosaurs in the game, the pterosaur sometimes participates in humorous antics, due to the game's comical nature.

The pteranodons in the game come in a variety of skin colors. These include a color schemes seen in the films, such as a brown color like those seen in Jurassic Park III and dark gray with either dark red or dark blue marking like those seen in Jurassic World. They also come in dark gray with dark green markings, a color scheme not seen in the films.

Chronologically, pteranodons first appears in the end cutscene of the The Lost World: Jurassic Park missions in an identical manner to their appearance in the actual film's ending, except that after the perching pteranodon lets out a cry it pulls out a coffee cup and takes a sip from it.

In the level "The Spinosaurus", the humans launch a nest belonging to the pterosaur at the Spinosaurus to help the Tyrannosaurus rex that the Spino is attacking. When the egg inside the nest hits the large dinosaur, it hatches and the newly born pterosaur quickly flies away from the conflict.

In "The Bird Cage", a pteranodon snatches Eric Kirby as he crosses the bridge to the aviary to feed its hungry babies in the opening cutscene and can be seen flying throughout the level's first half. As the player(s) run through the walkway to rescue Eric, an adult pteranodon briefly blocks the path, but it flies away once the rope holding up an InGen box right above the flying animal is cut. Billy ultimately saves Eric Kirby from the nest and drops the rescued boy on top of on a pteranodon cornering Alan Grant and Eric's parents causing the section of the walkway they were in to fall into the water below. As Billy Brennan paraglides away, several pteranodons pursue him.

In the end cutscene to the Jurassic Park III missions, the same pteranodons are seen still chasing Billy as he paraglides.

In "Under Attack", pteranodons and dimorphodons are freed from the Jurassic World Aviary when machine gun fire from Masrani's helicopter shatters the enclosure's glass. They then proceed to attack Main Street and its visitors. In the level's first section, the player(s) must find ways to distract the pteranodons through various means to progress through the level.

The amber brick for pteranodon and the boneboxes that unlock its skeleton is unlocked in the level "The Bird Cage". It is one of the two pterosaurs that are playable in the game and it can only be spawned in two locations: the Jurassic World Aviary and the Isla Sorna Aviary. Unlike the smaller dimorphodon, pteranodon is able to pull hover switches. The juvenile pteranodon can not be unlocked, but in the Isla Sorna Aviary the player can control one to acquire the red brick found in the area.

In The LEGO Batman Movie Story Pack in LEGO Dimensions, a Pteranodon makes an appearance as a creature on the Jurassic World land summoned with the Phase Keystone.

A Pteranodon in LEGO Racers 2 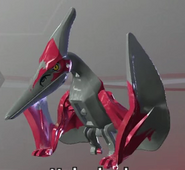 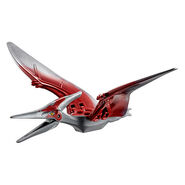