Quartermaster Zombie is a Pirates of the Caribbean minifigure that was released in the 2011 set 4195 Queen Anne's Revenge. He has a grim expression.

Quartermaster is a zombie that works for Blackbeard in his quest to find the Fountain of Youth. He is also an Eleri Ipin, the man with no eyes, a prophet. He made the prophecy of Blackbeard's death. The Quartermaster Zombie worked on the Queen Anne's Revenge, and was very loyal. He drugged Jack Sparrow under orders of Angelica after the skirmish in London. He later fought the mutineers on the Queen Anne's Revenge, where he dueled the cabin boy, Scrum, and Jack Sparrow who defeated him. But victory came to his side when Blackbeard himself entered. He later fought the battle on Whitecap Bay. Later during the quest, he attempted to shoot Jack Sparrow because he took them to a dead end, but Jack eventually succeeded to find the way to the Fountain of Youth. He later fought in the battle against Hector Barbossa and his crew. When Blackbeard was fatally wounded, he and the Gunner Zombie tried to stop the Spanish from destroying the Fountain, but they were killed when they were crushed by a falling pillar.

The zombie aboard Queen Anne's Revenge 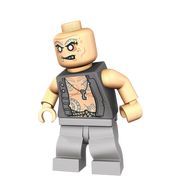 The Quartermaster (right) in LEGO Pirates of the Caribbean: The Video Game with Angelica (left, face turned away)

Quartermaster's token
Add a photo to this gallery

Retrieved from "https://brickipedia.fandom.com/wiki/Quartermaster_Zombie?oldid=1921369"
Community content is available under CC-BY-SA unless otherwise noted.