The Queen is comprised largely of preexisting minifigure parts. Her torso (reused from the Pirate Lady) is black and printed with a dark green bodice over a white chemise, and is sleeveless to expose her bright yellow arms. She has earth green hip, legs, and cape. She has a dual-sided face (reused from the Crown Queen) with crow's feet around her eyes and red lipstick, with one side showing a smiling facial expression and the other side showing a frown. Her hair is a dark brown ponytail.

The Queen is presumably associated with the Dragon Kingdom, acting as their set's Queen chess piece in the 853373 Kingdoms Chess Set. However, since she has no known role in the theme's storyline and exists solely for this board game, it is not known if she actually possesses any leadership or royalty among the Dragon Kingdom, since her title of "Queen" only refers to the chess piece. 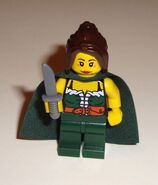 The other expression on the backside of the Queen's head.