Queen Watevra Wa'Nabi is voiced by Tiffany Haddish and is a figure shapeshifting character who is the tritagonist of The LEGO Movie 2: The Second Part. She is the best friend, master, boss and leader of Sweet Mayhem. All of the advertising presents her as the main antagonist of the film who intends to brainwash all of Emmet's friends and take over Apocalypseburg.

Queen Watevra Wa'Nabi is actually Emmet's heart that he made at the very start of the movie, she is the ruler of the Systar System and is portrayed as a pile of pink, purple, red, yellow, orange, and blue bricks with a face and a crown until she transforms into one of her many different forms, including horse, car, butterfly, hammer; devil, volcano, cello, whale, octopus, gorilla, dinosaur, dragon, bat, rocket, and toaster.

She sings two songs in the movie: one about how she's not evil which arouses suspicion in Wyldstyle but turns out to be the truth and one about how she doesn't fancy Batman - this song is a complete lie however, she just wanted to make him love her so that, as is stated in the film, he would say "I do" at their wedding. 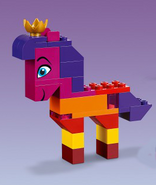 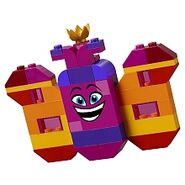 Add a photo to this gallery
view · talk · edit The LEGO Movie characters
Retrieved from "https://brickipedia.fandom.com/wiki/Queen_Watevra_Wa%27Nabi?oldid=1974552"
Community content is available under CC-BY-SA unless otherwise noted.