Queenie Goldstein is a Fantastic Beasts minifigure introduced in LEGO Dimensions in 2016. She is physically made in 2018.

Queenie is the younger sister of Tina Goldstein and sister-in law of British wizard Newt Scamander. Like Tina, she was born somewhere in the United States. Both sisters were orphaned by the deaths of their parents at an early age, that they had to look after each other; by 1926, both sisters had a strong relationship and were already sharing an apartment in New York City.

She also worked at the Magical Congress of the United States of America, working at a desk job that her older sister would had to work at after being demoted from being an Auror for standing up for a hapless individual the latter's superiors disapproved of. The two eventually meets Newt Scamander during his time in the city, whom will eventually marry Tina and move back to the United Kingdom with her after the events of Fantastic Beasts. 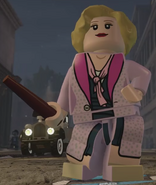