"You didn't see that coming?"
―Quicksilver in Avengers: Age of Ultron

Quicksilver is a Mutant with super-speed. He and his sister Wanda were the half-siblings of Polaris and the kids of Magneto, briefly working in their father's Brotherhood of Mutants out of gratitude to him, but they left Magneto at the first chance and joined Captain America's new roster of Avengers alongside Hawkeye. Despite being a good guy at heart, Pietro can be somewhat arrogant and impatient since everybody moves too slow for him.

Pietro is very protective of his sister and opposed to the idea of Wanda marrying an android, but has come to grudgingly accept it.

Pietro Maximoff was a native of Sokovia who grew up with his fraternal twin sister, Wanda. The country, which was embroiled in constant war and strife, became the base of operations for a HYDRA cell operated by Wolfgang von Strucker, who recruited Pietro and Wanda to take part in a series of tests involving the Scepter, giving the twins superpowers. While his sister received a number of mental abilities, Pietro acquired the ability to move at supersonic speeds and other physical features.

When HYDRA fell, the twins joined Ultron to continue their quest for revenge on Tony Stark, but eventually switched sides and helped the Avengers when they discovered Ultron's true intentions. Pietro then fought in the Battle of Sokovia alongside all of the other Avengers, but later sacrificed his own life to protect Hawkeye and Costel, much to his sister's grief. 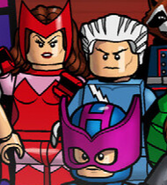