R-3PO is a Star Wars minifigure released in 2011, based on a red protocol droid from the Star Wars universe.

R-3PO (Ar-Threepio) was a 3PO-series protocol droid affiliated with the Alliance to Restore the Republic during the height of the Galactic Civil War. Known for his distinctive red coloring, a tattoo on his left posterior plating that read "Thank The Maker," and a moody disposition, R-3PO was stationed at the Alliance High Command's secret Echo Base on the remote ice world of Hoth by 3 ABY. After his original owner, a smuggler named Chaz, purposely left R-3PO at the base for the Rebels to deal with, Alliance Major Palo Torshan recommended he be used as an espionage droid to uncover Imperial spy droids. R-3PO successfully helped to foil several Imperial infiltration attempts while serving at the base and, subsequently, with High Command.

R-3PO in the Echo Base set 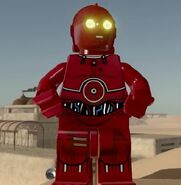