This article is about the minifigure. For any of the sets with which to actually build a bigger version of R2-D2, see R2-D2 sets.

R2-D2 is a Star Wars minifigure first released in 1999, and has been released at least once every year since.

The Minifigure of R2-D2 has come in eight variations: the classic variation, the 2008 redesign, the Clone Wars variation, two serving tray variations, the snowman version, the 2013 redesign and the Christmas Tree version.

The original version is the most famous variation, spanning the LEGO Star Wars theme from 1999 to 2008.

Unlike most Minifigures, all of R2-D2's parts were first exclusive (later becoming a standard for other astromech droid Minifigures such as R4-P17) not sharing the same components of standard LEGO Minifigures. He was composed of four parts: the Headpiece, the two leg pieces, and the body piece. The head was shaped like a dome, featuring blue designs all over, making it resemble Artoo's head. The Leg pieces were plain white. The body piece was cylindrical, featuring blue designs on it to make it resemble Artoo's body.

He has appeared in this variation in thirteen sets.

The Head Only variant refers to when only Artoo's head comes in a set, due to Artoo having the ability to enter vehicles with only his head being exposed in the movies in order to do repairs. All the sets in which this version appears have the head of the original variant.

He has appeared in three sets in this variation.

The 2008 Redesign, also known as the New Head Variation, is the variation of R2-D2 that came with a new head as first seen in the set 10188 Death Star. This R2-D2 minifigure came with almost the exact same body as the original variant, but utilized a new headpiece. The new head piece had more thick shades of blue compared to the earlier variation, along with a more cartoon-like appearance. Also, the holes in the bottoms of the head and body were changed to axle holes instead of round Technic pin holes.

He has appeared in this variation in nine sets.

The complete new variation uses the exact same pieces as the previous two variations, but has a head that resembles the New Head Variation and the body is reprinted to follow the style implemented in a similar head seen in the New Head Variation; thus a new body print with thicker blue details and less details was created. The body has a more cartoon look just like the new headpiece.

This variation has so far only appeared in one set.

A special variant is included in 10236 Ewok Village. This version uses a Titanium Metallic version of the head from the Clone Wars variant, atop the body from the 2008 version. It is only seen in this set. The promotional materials for the set use the regular 2008 version, possibly indicating that the existence of this version is an error.

In 75038 Jedi Interceptor, a new variation was introduced. This one has more detailed markings on the head and body, and the head is now coloured Titanium Metallic. There is also a slight variation where the dot on the front of the head is not coloured red.

This is the current variant and has appeared in eight sets.

In the 75056 LEGO Star Wars Advent Calendar, R2-D2 appears dressed as a Christmas Tree with the normal head piece replaced by a nose cone to emulate the tall look of a tree. Artoo also sports a star on top of his head complete with an Earth Green re-color.

When aboard Jabba the Hutt's Sail Barge, Artoo has a tray with drnks on it. This variation has appeared twice, in the two different LEGO versions of the Sail Barge. It is represented by placing a 2x6 plate between the head and body of a regular Artoo variant. The original version uses the original design, and the new version uses the 2008 redesign.

R2-D2 has appeared in all five LEGO Star Wars video games. In the first three, he appears in his original minifigure variation. This variation looks almost completely identical to the Standard Variation, except for the fact that his head could rotate and a third leg sticks out of his body piece when he moves. In LEGO Star Wars III: The Clone Wars he is his Clone Wars variant. In LEGO Star Wars: The Force Awakens, He is the 2013 redesign.

R2-D2, phonetically spelled Artoo-Detoo and nicknamed R2 by his various masters, was an R2-series astromech droid, and was undoubtedly the most famous unit of the R2 series. R2-D2 started his existence on a Naboo ship of which Padme Amidala, Qui-Gon Jinn, and Obi-Wan Kenobi, along with other natives of Naboo, used to escape Naboo and reach the Galactic capital Coruscant. The ship's astromech droid repair team were requested to fix the shield generator while being blasted by the Trade Federation in space. R2 succeeded in repairing the shield generator, thus saving the lives of everyone on board. The ship soon had to stop at Tatooine. There, the ship's crew recovered a new hyperdrive and R2 befriended the young Anakin Skywalker and C-3PO. R2 soon helped in the recapture of Naboo. Soon, R2-D2 became an ordinary companion of the now-Jedi Knight Anakin Skywalker, helping in the Battle of Geonosis by keeping Padme alive. At the outbreak of the Clone Wars, R2-D2 served aboard almost all of Anakin Skywalker's Jedi starfighters, accomapnying the Jedi on countless missions with Anakin, Obi-Wan, and several Jedi, including Ahsoka Tano he even saved himself and Mace Windu after the endurance crashed when Anakin and Windu after Skywalker picked up Jango Fett's helmet which was rigged with explosives by Boba Fett. At the end of the Clone Wars, and Anakin's fall to the dark side, R2 and 3PO eventually fell into the hands of the Rebel Alliance's Princess Leia, until her ship was boarded. She inserted the plans of the Empire's Death Star inside Artoo and sent him to Tatooine. R2 successfully brought the plans to the Jedi Obi-Wan Kenobi and Luke Skywalker, son of Anakin. Luke soon joined the Alliance, with R2-D2 becoming his X-wing co-pilot in various missions, including the destruction of the Death Star. The Alliance soon defeated the Empire and afterwards, R2 continued his duties as Luke Skywalker's co-pilot until the remaining fragments of the Empire could be eliminated. 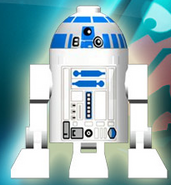 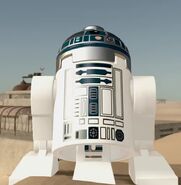 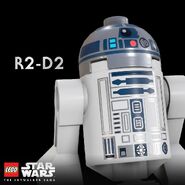