R2-Q5 is a LEGO Minifigure from the Star Wars theme, based on the droid of the same name. He was first released in 2006, and was re-released in 2008 with a newer design.

R2-Q5 was a black Imperial Astromech Droid contracted on the second Death Star. During the battle of Endor, R2-Q5 was destroyed along with the Death Star II when it was destroyed by Lando Calrissian and Wedge Antilles.

R2-Q5's second variant, released in 2008, has more printing on the droid's dome like R2-D2's coincidental redesign. The body and legs remain the same as the previous rendition. 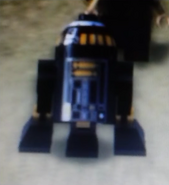 R2-Q5 in the GBA version of LEGO Star Wars II: The Original Trilogy 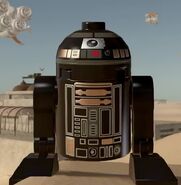