R3-A2 is a minifigure based on the same character in the Star Wars universe.

R3-A2 was an orange R3-series astromech droid. It was seen in Echo Base during the Battle of Hoth in 3 ABY.

Like other R3 droids manufactured by Industrial Automaton, R3-A2 was designed for high tech work on military installations. The clear plastex dome showed off a newly-updated Intellex V computer system, which contained detailed statistics on thousands of military starships. R3-A2 could hold up to 5 hyperspace jumps in active memory, and could also coordinate piloting coordinates and approach angles during combat. His eye was a round kind unlike most R3 units. 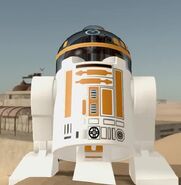