Three years later, R4 was released as a part of the set 7283 Ultimate Space Battle from the Episode III: Revenge of the Sith subtheme. In this set, R4's head was given its own unique design - a red part with black, silver and white printing, and represented R4's appearances in the films more closely.

R4-P17 was Obi-Wan Kenobi's red astromech droid. R4 piloted Obi-Wan's Delta-7, Delta-7B and Eta-2 Jedi Starfighters. She was originally hard-wired into Obi-Wan's Delta-7; however, when Obi-Wan acquired his Delta-7B Starfighter, R4 received a standard astromech body so as to function with compatibility for the new starfighter. R4-P17 was destroyed in the Battle of Coruscant in Obi-Wan's red Eta-2 by Buzz Droids. 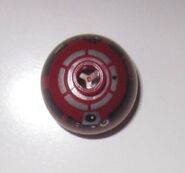