R5-D4 is an astromech droid from the Classic Star Wars theme.

R5-D4 has a White body, with mainly Medium Stone Grey printing, white 'legs', and a plain white dome. R5-D4 also has a Brick-Yellow 2x2 round plate in between it's body and dome, making R5-D4 taller than other Astromech Droids.

R5-D4 has two plain white astromech droid legs, which connect to a white body. The body has printing on the front, primarily red, blue and grey in colour, all representing various compartment doors and components found on an astromech droid. On top of the body piece sits a white R5-series head, which features printing all around, most noticeably a red printing at the top of the piece, following R5-D4's predominantly red colour scheme. The piece also has black and grey printing for depicting sensors and other modules that the droid is known to have in the Star Wars universe.

He was once in the possesion of Jawas led by Nebit, and then sold to Owen Lars. R2-D2 was given orders by Princess Leia to get to Obi-Wan Kenobi under any means necessary, so R2-D2 (supposedly) wrecked R5's motivater so R2-D2 could get off the sandcrawler and find Obi-Wan instead of R5-D4 getting off. After R5-D4 malfunctioned, he was replaced by R2-D2 under the suggestion of C-3PO. The droid was stolen by a Squib as a rescue before the sandcrawler was damaged and killed the Jawas and Nebit and the droids malfunctioned after Sandtroopers came. 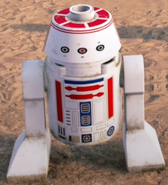