Rabbit (sometimes called a bunny) is a small rodent-like animal. It appeared in two System compatible variations – the older in certain Belville sets, and a new mould created in 2012 for the Friends theme. The creature’s digital image can be seen in Harry Potter online games. There is also a DUPLO compatible variation used in DUPLO and Disney Princess themes.

The Belville rabbit figure was introduced in 1999. The creature is in alert sitting position, with elevated head and long ears slightly bent, its unusually long, curved front paws slightly apart from the body, which allows the creature to hold an object, preferably a carrot. It appeared in white and grey, usually with printed eyes. In most sets the rabbit is an enchanted pet of a princess or a fairy’s companion.
The first DUPLO rabbit appeared for the first time in 2010. The mould, which has no movable parts, depicts the rabbit in sitting position with all four paws on the ground. It has long hind paws and small round tail. Its back is bent and its long ears are inclined to the back slightly over the big head. The creature is looking staight ahead with a pair of black eyes. Its nose is also printed but in light pink. So far, the rabbit is available in three colours: white, reddish brown and red.
The Friends rabbit is a much smaller, single-stud mould. The creature is also sitting with curved back, small tail and ears inclined to the back. Front paws are short and symmetrically raised, posed as though begging. It has printed eyes, nose and smiling expression. The white rabbit appeared for the first time in 2012 and a grey variation was introduced in 2013. 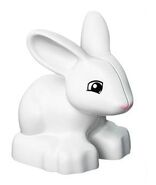 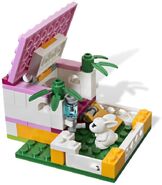 Friends rabbit in its home - side view