Brickipedia
Register
Don't have an account?
Sign In
Advertisement
in: Class 2 articles, Minifigures (theme), Minifigures introduced in 2011,
and 2 more
English

Not to be confused with Race Car Guy.

Race Car Driver is a minifigure that was released in 2011 as part of the 8803 Minifigures Series 3. The Driver has interchangeable blond hair and red helmet.

The Race Car driver has unmarked red legs and white hips. His red torso depicts a Race Car Driver suit and has several words on it: 'Octan' at the centre, 'N. Groves' on his belt at the bottom, and 'Stafford Engines' at the top left. At the top right is a black spanner with flames coming out the back. The Race Car Driver's head has eyes, brown eyebrows, and a large open smile mouth. He has two pieces to go on his head: a blond hair piece and a printed red helmet and a transparent brown visor. 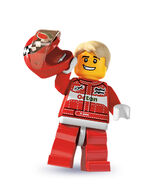 Deutsch Français
Community content is available under CC-BY-SA unless otherwise noted.
... more about "Race Car Driver"
RDF feed
Accessories
Red Helmet +
Appearances
8803 Minifigures Series 3
Minifigure Speech Bubbles +
ArticleRating
2 +
Image
RCD1.jpg +
InfoboxTemplate
Minifigure +
ShopDescription
“Must...go...faster!” Years ago, th … “Must...go...faster!”</br></br>Years ago, the Race Car Driver met a mysterious man with a robot monkey who told him that he would be compelled to go faster and faster all his life. And it was true: from tricycle races to soapbox derbies, he has always been happiest when moving as fast as safety and the laws of physics will allow.</br></br>As soon as he was old enough to enter competitions, he was off and racing, constantly tweaking, modifying and tuning up his cars for more and more speed and power. Now that he’s become a professional driver, he can finally do what he’s always dreamed of doing: tour the world’s racetracks in one of the fastest things on wheels!ks in one of the fastest things on wheels! +
Theme
Minifigures (theme) +
Title
Race Car Driver +
Years
2011 +
Advertisement