Racer X is a minifigure from the Speed Racer theme.

The minifigure appears in two of the four Speed Racer sets and is identical in both. He's dressed all in black with large white X's on his chest and helmet. His head is the same as Bruce Wayne, Security Guard, and Colonel Hardy.

Racer X's real name is Rex Racer, the older brother of Speed Racer. Rex was a champion racer who grew frustrated with the corruption in professional motor racing. His driving style became ever more dirty and reckless as he fought to survive against the cheating corporate interests, until he eventually fell out with his father, Pops Racer, and left. A few years later, Pops and the young Speed were watching on television when Rex's car crashed and exploded. Rex was presumed dead, but in reality had faked the accident in order to go undercover against the big racing corporations. He had plastic surgery to prevent his true identity ever being found out, and began to work with an investigator named Inspector Detector to bring down the crime lords behind professional racing. The new "Racer X" made his debut two years after Rex faked the accident and immediately gained a reputation for aggressively targeting cheating drivers during races, striking fear into drivers and their backers. After Speed Racer falls foul of the corrupt Royalton Industries, Racer X approaches him and asks him to join his cause. As they race alongside Taejo Togokhan to save the Togokhan family business, Speed notices similarities between his style and Racer X's, and begins to suspect his true identity. After Taejo betrays them both and sells out to Royalton, Speed confronts Racer X, but is convinced by Racer X's new appearance and his insistence that Rex Racer is dead. Racer X later watches Speed win the Grand Prix from the stands, telling Inspector Detector that if he made a mistake by lying to Speed, it's a mistake he must live with. 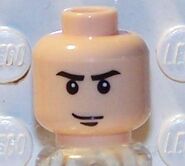 Racer X's minifigure with the visor down was used for the character Peelie Wheelie for The Robot Chronicles game.
Add a photo to this gallery