This article is about the theme. You may be looking for LEGO Racers (game).

LEGO Racers was a popular LEGO Theme that was first announced to the public in 2001. It is the successor of LEGO Race, and its first subtheme was Xalax. Since 2002, most race cars in LEGO System and TECHNIC universe (including Radio Control race cars) have been released under the LEGO Racers theme. Different subthemes have been developed including Drome Racers, Tiny Turbos and Power Racers, as have licensed subthemes, such as Williams F1, Ferrari and Lamborghini. Many Racers sets do not contain Minifigures; special Minifigures were included in sets from 2002, 2003, and some Williams F1 and Ferrari sets. Minifigures are also included in the 2012 sets. Promotional sets usually include Tiny Turbos. LEGO Racers was discontinued in 2012 and it was succeeded by Speed Champions, introduced in 2015.

The ThemeTable system is being renovated. See a list of pages tagged Racers here.

There is a forum about the work here 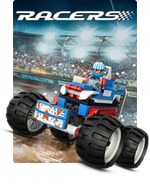 The Racers logo on LEGO.com
Add a photo to this gallery

Retrieved from "https://brickipedia.fandom.com/wiki/Racers?oldid=1899751"
Community content is available under CC-BY-SA unless otherwise noted.