Ragetti is a minifigure that appears in LEGO Pirates of the Caribbean: The Video Game released in 2011.

Ragetti was a member of Captain Hector Barbossa's pirate crew serving as a cannoneer aboard the Black Pearl. He had lost his right eye and it had been replaced with a glass one, which constantly fell out of it's socket. He was rarely seen without his partner in crime, Pintel. Together they served on the Black Pearl. Soon after joining a mutiny against Captain Jack Sparrow, the crew of the Pearl became cursed by Aztec Gold. They spent the next ten years trying to lift the curse.

In The Curse of the Black Pearl, the two kidnap and arrange parley with Elizabeth Swann when the Black Pearl attacks Port Royal. The crew become angered towards them after they discover Elizabeth is not Bootstrap Bill's descendant. When the Royal Navy arrive at Isla de La Muerta, they dress up as wenches in a longboat as a distraction for Admiral Norrington and his crew. After the following battle, they are arrested.

In Dead Man's Chest, they have escaped inprisonment and headed out on the seas in a longboat with the prison dog. They attempt to commandeer the Black Pearl after seeing it beached on Pelegosto. They subsequently join the crew after they narrowly escape the island. They later attempt to steal the Dead Man's Chest to earn a bit of profit. They are among the few surviving crew of the Pearl after it is dragged to the depths by the Kraken.

In At World's End, they join the quest to bring back Sparrow and the Black Pearl. They are among the group Jack intends to leave behind in Davy Jones' Locker. It is revealed that his glass eye is Barbossa's piece of eight needed to free Calypso. Following this he wears an eye patch instead After Barbossa is unsuccessful at freeing Calypso, Ragetti speaks the incantation required to free her, as it must be said as if to a lover. He is present during the battle around Calypso's Maelstrom and after Barbossa commits mutiny against Jack once again, he remains part of the Pearl's crew. 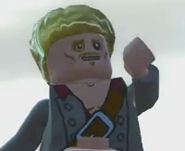 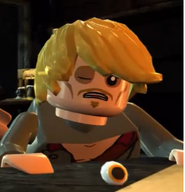 Ragetti with his eye popped out onto the table

Character token
Add a photo to this gallery