Ralph Wiggum is a minifigure released in 2014 as a part of The Simpsons theme.

Ralph Wiggum is the son of Chief Clancy Wiggum. He is developmentally challenged and says random things. He is often seen in odd scenarios and is the odd man out among the school yard. 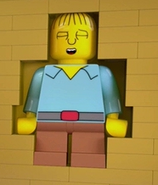