This article is about the Racers figures. For the BIONICLE set of a similar name, see 8537 Nui-Rama.

A Rama is a race-loving alien from the planet Xalax. In sets, Ramas were a type of piece that was used in place of a Minifigure in the 2001 Xalax sets. Ramas are slightly taller then an average LEGO brick, but still shorter than 4 plates high.

Ramas are (as seen in LEGO Racers 2) short creatures with stubby bodies/heads, and long legs, although their LEGO versions only show the the legs as quite stubby via some printing. All of the LEGO versions of Ramas show them holding a small steering wheel. 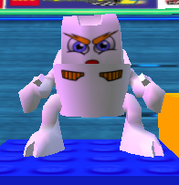