The Rancor is a brown monster from Star Wars released in 2013. One was owned by Jabba the Hutt and was housed in the bottom of his palace.

The Rancor species were originally from the planet Dathomir, home planet of Asajj Ventress.
Jabba's Rancor Pateesa was given to him as a birthday present from Bib Fortuna. When the crime lord attempted to execute Luke Skywalker by dropping him into the Rancor pit, Luke killed the Rancor by crushing it under a large portcullis, piercing and crushing its skull, causing Jabba to instead try and execute him and his friends at the Sarlacc pit. Later, Luke said he was sorry to kill the poor creature, but decided it was best to put it out of its misery, as it was half-starved and was impossible to relocate it. 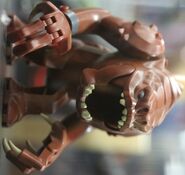 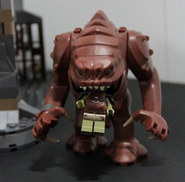 With a Gammorean Guard in its mouth.

A Rancor as it appears in the video games. 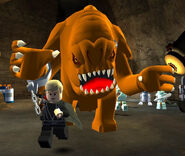 A rancor as it appears in LEGO Star Wars: The Padawan Menace

Rancor in The Yoda Chronicles game 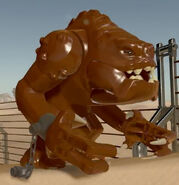