Raphael's head is a new mould made for the turtles. It is Dark Green with a red bandana around it (the bandana is part of the mould and cannot be removed). In 79103 he has an angry expression in which his teeth are bared and clenched, but in 79102 and 79105 he is frowning. He wears a new turtle shell piece made exclusively for the Teenage Mutant Ninja Turtles line. It fits around his neck like a cape or a beard. It is khaki, has a textured turtle shell pattern, and has a brown belt. The front of Raphael's torso piece is green on the outside, with a yellow center that looks like a normal turtle's stomach and a continuation of the belt from the shell. The back of the torso features a printed shell (even though this is pointless; his shell piece covers his entire back). His legs are green, just like the rest of his body, and finish off the printing. There is printing of brown knee pads on his knees.

In the new wave, Raphael has the same green head and red bandanna, but has a metal guard protecting his mouth. He also has metal armour on his torso and his legs, but has the same shell. He metal sort of looks like his normal body, but silver and jagged. His belt is brown, but with red straps and two metal lines. His arms are bare, and are still green, and he still uses twin sai as his main weapon.

Raphael (Raph for short) was formerly, along with his three brothers, a normal turtle, who was bought in a pet store by Splinter, when he was a human named Hamato Yoshi. Yoshi then saw many strange men (the Kraang) meeting. Those men carried mutagen, which caused the mutation of Splinter and the turtles. The mutagen mutated Raphael and his three brothers into larger, more intelligent mutants, while turning Splinter into a giant humanoid rat. Splinter then hid out in the sewers for 15 years with his turtles, until Raph and his brother turtles persuaded Splinter to let them go up to the surface. In the show, he is one of the main protagonists alongside his 3 brothers. He is the most impatient and aggressive of the turtles, but is also the most skilled fighter. He is often insulting the other turtles' interests and questions Leonardo's leadership. He picks on Michelangelo, but is protective of Mikey because Mikey is the youngest turtle. Even though he tries to act tough, he worries about his brothers and gets emotional if his youngest brother is hurt. 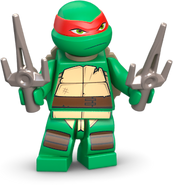 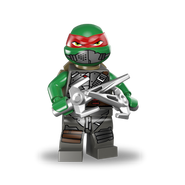 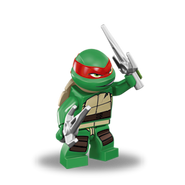 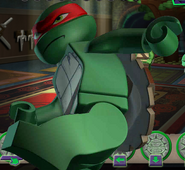 Raphael in the online game, about to kick the screen 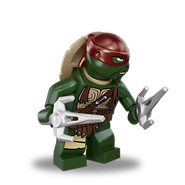