The Rapper is a minifigure from the third series of Minifigures. He comes with a boombox and a gold microphone.

The Rapper has a black boombox, similar to the Fitness Instructor, a golden microphone, and a new baseball cap with gold and black styling. He has sunglasses, thin sideburns and beard, and his teeth are gold. His hat is the same mould as the Lumberjack's and the Baseball Player's hat, only the colouration is different and they all have different printings. His sand blue pants are sagging and his underwear is showing. He is also wearing a white tank-top with a gold chain that has a dollar sign printed on it. 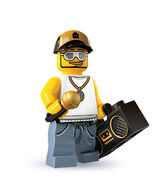 The Rapper from different angles.