The Rat or Mouse is an Animal Minifigure. It has two variations; the most common being the "crawling" variation, but there is also a "standing" variation. The piece is four studs long, with the body taking up two studs, and the tail wrapping around the last two. The standing variation only takes up one stud. 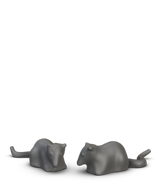