Rawzom is a Legends of Chima minifigure released in 2013.

Rawzom is mainly black, with small amounts of purple, gold, red, and grey. On his legs he has three grey talons on each foot as well as goldish-tan knee protectors and purple feathers on his upper left leg, and a grey pouch on his right. He has gray stripes going all over his torso, with the raven symbol on his back. He has purple hands and black arms. He has a new armor piece in gold or sliver, depending on which set with his black wings attached to the back and a flat, transparent blue stud on the front. His head is double sided with a crown on each side along with squinting yellow eyes and a gray beak. His helmet is also black with red markings and a gold crown, along with a black beak.

Rawzom is the Grand Thief Master, or king, of the Raven tribe, although Razar seems to do most of the leading in the show. He and his fellows, including Razar, Rizzo and his accountant Razcal, sided with the Crocodiles and Wolves in the conflict spanning all of Chima. Like all Ravens, Rawzom specialises in stealth and thievery. 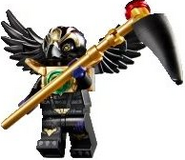 Rawzom in Legends of Chima: The Animated Series

Rawzom on his Speedor
Add a photo to this gallery
view · talk · edit Legends of Chima Minifigures
Retrieved from "https://brickipedia.fandom.com/wiki/Rawzom?oldid=1959782"
Community content is available under CC-BY-SA unless otherwise noted.