"Hold onto your butts…"
―Ray Arnold in Jurassic Park

John Raymond "Ray" Arnold is a character who appears in LEGO Jurassic World.

Ray Arnold, full name possibly John Raymond Allen Arnold, is the chief engineer of Jurassic Park. His catchphrase was "Hold on to your butts," which he repeated twice in the film.

He made frequent announcements over the loudspeaker informing the other employees on the position of the approaching storm. After Dennis Nedry turned the power off he told John Hammond that he couldn't get Jurassic Park back online without Nedry. Arnold showed great irritation with Nedry's personal touches to the park's system. Sometime Sunday morning, Hammond told Arnold to shut down the entire system and restart it. Arnold was against this idea because they had never shut down the entire system before and he was not sure that it would come back on at all. Despite this, Hammond was adamant and Arnold eventually shut down the system. He was greatly relieved, along with the rest of the survivors in the control room, when the computers came back on. He set off on his own to the maintenance shed to re-boot Jurassic Park while the rest of the survivors went to the security bunker to await his return. He was ultimately killed by the Velociraptors in the shed, though this was offscreen. Ellie Sattler later found his dismembered arm in the shed when she went to reboot the power. After the incident in Jurassic Park, Arnold's family sued InGen in a 23 million dollar lawsuit. 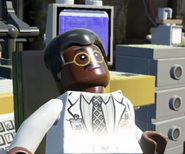