"Every ancient religion has its own myth about the end of the world."
―Ray to Winston in Ghostbusters (1984)

Ray's devotion to the company was obvious when he mortgaged the house his parents had left to him to provide the capital to begin Ghostbusters Inc. Ray was also a handy and proficient man who was largely responsible for the repair and modification of the Ecto-1. He wasn't particularly religious, but did seem to believe in a spiritual realm of sorts. In the video game, it is shown that he believes in the concept of a soul. He also states that he played a game entitled Ghosts and Gargoyles while in the seminary, indicating he may have at one time considered becoming a clergyman.

Ray is regarded by Peter as the "heart of the Ghostbusters." Indeed, Ray displays a level of ebullience when it comes to Ghostbusting and paranormal science in general unmatched by any of his colleagues (one example is were Peter was slimed by Slimer is where he exclaims "That's great! ACTUAL physical contact!"). His mention of an undersea, unexplained mass sponge migration shows he is more than eager to go anywhere it takes to study the strange and unusual.

Ray is generally the most optimistic and positive of the group in outlook, however, bits of cynicism will surface on occasion. He unintentionally gave physical form to Gozer when he thought on the Stay-Puft Marshmallow Man. 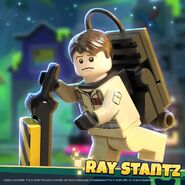