Raymus Antilles, also referred to as Captain Antilles, is a minifigure based on the character of the same name from the Star Wars universe.

This minifigure has a plain dark tan leg piece, tan torso piece with flesh-coloured hands. The torso piece has black printing for a belt, pockets and outlining, along with silver printing for the belt clasp and the base of the rank insignia. Sand blue printing is used for the shirt Antilles wears underneath his jacket, and flesh printing is used for his neck at the top of the piece. Five blue dots are present on the insignia plate, located on the right-hand side of the piece, indicating his rank. A horizontal strip of dark tan printing is used at the top of the torso piece for detailing on the jacket, which also continues over to the back of the torso. Captain Antilles' flesh-coloured headpiece is double-sided. One side depicts Antilles with a smile, with brown printing used for the eyebrows, black printing for dot eyes, the mouth, and both black and white printing for the chinstrap. The other side of the face is similar in printing, but a pained expression is instead present, with the eyes not being complete circles, upturned eyebrows, and a wavy mouth. Antilles comes with one accessory- a white helmet with a black visor, which is usually used on Rebel Troopers. To date, Antilles is the only minifigure apart from the Rebel Trooper to come with this helmet.

Captain Raymus Antilles was the owner of R2-D2 and C-3PO and the captain of the Tantive IV, Princess Leia's escort ship. Both Princess Leia and Captain Antilles were loyal to the Rebel Alliance, and both were on a mission to deliver the secret plans which would reveal the weakness of the Death Star, a planet destroying battle station that the Galactic Empire created. While carrying out their mission, their ship was invaded by Imperial Stormtroopers and Darth Vader, soldiers of the Galactic Empire. During the mission, Captain Antilles was choked to death by Darth Vader. R2-D2 and C-3PO escaped with the secret plans and both found a new owner, Luke Skywalker. 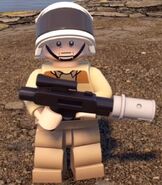