Brickipedia
Register
Don't have an account?
Sign In
Advertisement
in: Class 4 articles, Minifigures introduced in 2017, Super Heroes Minifigures,
and 2 more

Red Guardian is the Russian answer to Captain America. The original one was Alexei Shostakov, Black Widow's husband who had to fake his death to train him in secret into becoming Red Guardian (and his presumed death being the reason for Natasha taking the "Black Widow" identity). 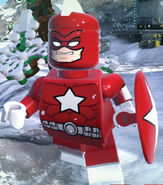