"I'll be the man Batman can't be. I'll be better."
―Red Hood in LEGO DC Super-Villains

Red Hood is a Super Heroes minifigure who first appeared as a playable character in the handheld version of LEGO Batman 2: DC Super Heroes and on console version for LEGO Batman 3: Beyond Gotham. He physically appeared in the set 76055 Batman: Killer Croc Sewer Smash, released in summer 2016, and released again in the set 10753 The Joker Batcave Attack (as Robin).

Red Hood has a red colored head with angled, white eyes that are surrounded by black ovals. His face is otherwise featureless but has a mirrored line that comes straight down his face until under his eyes where it slants inwards and becomes vertical. He wears a brown jacket that is opened to reveal a tight, grey shirt. He has a black belt above his hips and wears black pants and gloves. He carries dual pistols and has acrobatic, explosive, grapple, and hacking abilities.

After Dick Grayson had a fall-out with Batman and left the Robin mantle to become Nightwing, Batman discovered Jason Todd trying to steal the Batmobile's tires. He gave Jason a chance at a better life and made him Grayson's successor as Robin. However, in an attempt to get to Batman, The Joker kidnapped and seemingly killed Robin. Years later, Jason was resurrected (Either by Ra's al Ghul's Lazarus Pit or an unintended result of Superboy punching a hole in reality) and returned to Gotham as the Red Hood, a super villain intent on getting revenge on Batman for never avenging his death at the hands of Joker. Along Red Hood's scheme for vengeance on Batman he acted as something of a vigilante who fought violent crimes while committing several other crimes himself and waging war on the gangster Black Mask. He was briefly part of a mercenary team with Arsenal and Starfire. However, he eventually created another team, Red Hood and the Outlaws, which consisted of him, Bizarro, and Artemis.

Red Hood is considered to be a member of the Bat-family, which primarily consists of Batman, Robin, Nightwing, Red Robin, Alfred Pennyworth, Batgirl, and Commissioner Gordon. However, due to his more violent methods, his relationship with Batman is uneasy at best.

Red Hood is unlocked for purchase after finding the first minikit in Brawl at City Hall. He costs 200,000 studs. 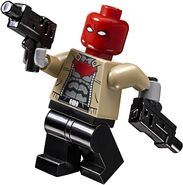 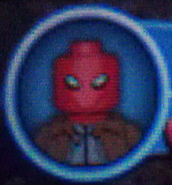 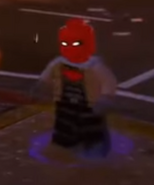