General Thaddeus "Thunderbolt" Ross was a celebrated US military-general who was positioned at the military-base in New Mexico where Dr. Bruce Banner was developing his Gamma Bomb. Ross never liked Bruce Banner as he believed him to be weak and unmanly while also disdaining the doctor's romantic-relationship with Ross's distanced daughter Betty. Eventually their was an accident at the site which transformed Bruce into the Hulk and caused Ross to be given the new job of hunting down the Hulk for the government.

Thaddeus obsessively hunted the Hulk for years and even developed a begrudging respect for the monster and the doctor who outsmarted him and outmatched him countless times. This lead Ross to start becoming desperate and reckless in his hunt for the Hulk, teaming up with super-villains like the Leader, Abomination, Absorbing Man, and Zzzax to try and defeat his nemesis despite Ross's hateful disdain for super-humans.

Eventually Ross teamed up with the evil science-organization A.I.M. to hypocritically transform himself into the Red Hulk to be equal against his green nemesis. Unlike Hulk, Red Hulk generates heat from his body that increases with rage and he is also capable of absorbing gamma energy, allowing him to turn Hulk back into Bruce Banner with a touch and drain the radiation from other gamma based superhumans. As Red Hulk however, Ross developed great hatred for himself and guilt which sometimes lead him to being an uneasy ally rather than a villain.

Red Hulk is similar to his green counterpart, but has red skin, glowing orange eyes, black pants, and a spikey hair style that appears physically on minifigures such as the Tennis Ace.

In Hulk and the Agents of S.M,A.S.H., Ultimate SpIder-Man, and Avengers Assemble Red Hulk is voiced by actor Clancy Brown. Brown is also known for his work as Mr. Krabs in SpongeBob SquarePants, Lex Luthor in the DC Animated Universe, and Surtur in Thor: Ragnarok. 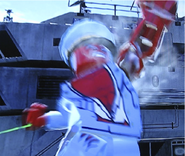