"I am the Red Skull, while you are all merely numbskulls!"
―Red Skull in LEGO Marvel Super Heroes

Red Skull is a Marvel Super Heroes minifigure that appears in 2014.

He has a red head printed with various lines to depict his sunken skull like head and he has an angry expression. His all black torso is printed his leather jacket and dark brown belt featuring a silver buckle with the HYDRA logo. The back is printed with the creases of the of the jacket, the back of his strap, and the continuation of his brown belt. He has plain black legs.

Johann Schmidt was born in Germany in 1899 and had a passionate hatred for all of humanity. This hatred lead Johann to become a high-ranking and feared lieutenant of the evil Axis Powers during the second World War where he became the Golden-Age nemesis of Captain America and an enemy to Bucky, Namor and the first Human Torch. Johann got his nickname "The Red Skull" from a mask he wore to inspire fear in his enemies and which also protected him from a deadly gas he used which left his victims looking like red skeletons.

Ultimately the Germans lost the World War and in a desperate attempt to defeat Captain America, Red Skull had his ally Baron Zemo attempt to release a bomb filled with Red-Skull Toxins. The plan failed and Red Skull got stuck on the ground when a bomb dropped, trapping him in a cavern with Red Skull gas that distorted his face into resembling a real red skull and which mummified him alive, keeping him preserved in stasis for decades. Not long after Captain America was reawakened, Red Skull's body was found by Baron Wolfgang von Strucker and revived to become a new leader of HYDRA.

In the MCU, Johann Schmidt was the test subject for the original Super-Soldier Serum during World War 2. It worked, but it reduced his head to a red skull. Schmidt then started hiding his face behind a latex mask and was appointed the leader of HYDRA. HYDRA was used to hunt down supernatural artifacts for the German powers but after acquiring the cosmic cube known as "The Tesseract", Red Skull rebelled Hydra from Germany as he intended on conquered the world using Tesseract-powered weapons made by Arnim Zola.

Red Skull became the original arch-enemy of Captain America who received the perfected version of the Super-Solder Serum and fought for America. This climaxed in a fight between the two of them on Red Skull's jet where he was trying to steal the Tesseract only to be seemingly vaporized by it. After this, Red Skull was teleported to the planet of Vormir where for his crimes he was forced to act as a guardian to the Soul Stone. 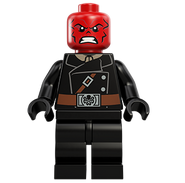 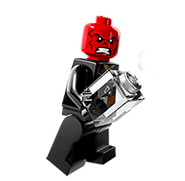