Reddish Brown Gorillas are minifigures that appears in Legends of Chima: The Animated Series. When the Lion Temple was under attack, Lagravis called for their assistance using a sonic roar. These gorillas are the foot soldiers of their tribe.

A minifigure resembling the Reddish Brown Gorillas appears in 70008 Gorzan's Gorilla Striker named G'Loona, but she has different printing and short legs. 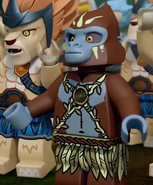