Rench is a green-skinned alien criminal who appears in the Space Police III line.

His head is much like Kranxx's, having the same shape, but coloured lime. His LEGO.com bio says that he is the third "nega-cousin" of Kranxx, explaining the similarities. His crimes are planetoid smashing, crunching prison pod walls, and bashing ultra-steel barriers. Rench is not very bright, but he loves to break things. He is the hired muscle of the Black Hole Gang. 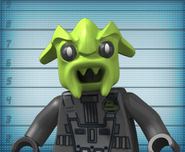