When this set came out in 2009 I knew it would be a set I would have to get. Now getting it I am happy with my purchase and am pleased to know that LEGO still has some good ideas left. This set brings back the medival feeling and adds a little European style and greatly adds to any Castle scene. 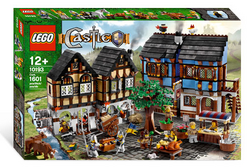 Containing 1,601 pieces this set is a beast but in the end it is well worth it. Read on to find out more:

I didn't get this set from LEGO.com but rather from EBAY for $95.99. But shipping was $20.00 so it averaged out in the end. But you get some really exclusive parts such as a set of coins, an awesome stair case, two new exclusive LEGO cows etc. You also get eight minifigures, a chicken, and even a horse. So in the end it was a fairly good buy for the price. Four stars.

Like most LEGO instructions the colors are completely wonky. The grey bircks are made so they appear to be black and the black are made to look brown. The minifigures are made so they look all the same esspecially the legs (excluding the dresses). There were also a few errors with the actual instructions such as on one page it called for a 1x2 brick but on the next page it was a 1x3 brick. Overall, the instructions were quite awful and hard to read so I can't reccommend this set for the instructions.

This set comes in a nice box with a mainly green pattern but with a stone pattern on the side. It features some of the minifigures on the box but not all which would be better if it featured them all.

The details of this whole set is spectacular! The amazing detail makes this set very well worth it.

The two buildings feature more detail then any other Castle set I have ever seen. The building featuring the blacksmith is quite amazing as well. The way it is detailed is quite well esspecially since it has that feeking of the past to it, The other building though doesn't seem realistic to me though. Why? Well back in the Medival Times the colour blue wasn't around as much. And for this building to be blue it really seems unrealistic. Personally I would prefer a brown; a dark brown for a bit more realistic feel. 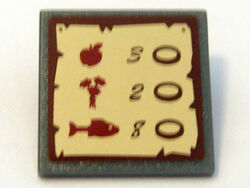 The scenery for this set is also quite fantastic! Unlike the buildings this isn't a large part of the set but is mainly the reason I wanted it. The scenery contains an apple tree that is about as tall as the buildings. The tree though easily falls apart and the leaves don't stay on that well. Also included is a stand where the minifigures can but and trade their merchandise.

When a LEGO set lacks in minifigures it isn't really fun. Well this set doesn't lack and is amazing! Including some amazing new minifigures they each help the set in its detail and quality. The way each minifigure shows that TLG put time and effort into the detail of their minifigures. Included with the set are two children, two peasent women, a blacksmith, two knights and a peasent man.

In this set the blaacksmith is basically best of the best minifigure. The hood is awesome but my favourite thing about the blacksmith is his head piece. His head piece fetures great detail and shows effort rather then just a classic miniufigure face.

In my humble opinion I hate LEGO knights. That meaning that these stink. The two knights featured in this set are quite boring, plain and uninteresting. Although I do like their double sided head pieces the rest of the minifigures are waste.

I love new parts on minifigures. Well these minifugres make my life so much better. Including two new minifigures they both contain new hair pieces (at least to me) and cool face designs. Although they are both supposed to be male one looks female and is hard to tell whcih.

The two peasent women of this set are quite nice features to have. They both have great printing detail on them and have very nice hair pieces that can be used for other things.

The peasent man well there is a reason he is a peasent. With the facial expression on him you can really tell that he is very depressed and is bored. He comes with a hood such as the blacksmith and also comes with a "backpack". He features great printing!

Overall, as you can tell I personally love this set. It contains great detail and is fun to work with and use. From the minifigures to the details to even the actual set this by far is the greatest set I own (and I own a lot). Great job to TLG for designing this set.

Retrieved from "https://brickipedia.fandom.com/wiki/Review:10193_Medieval_Market_Village/Klagoer?oldid=1499706"
Community content is available under CC-BY-SA unless otherwise noted.