Hi, welcome to another LEGO Friends review! Today I'm reviewing 41005 Heartlake High, one of the larger Friends sets of 2013. So let's get started: 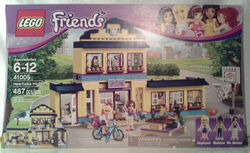 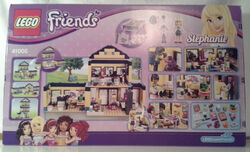 The box for the set is very nice overall, with the beveled edges found on all large Friends sets, and a good design. The back of the box shows off the different details included in the set, which I'll go through later. 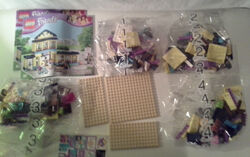 Upon opening the box, you find 4 numbered bags, a few large plates, a sticker sheet, and 2 instruction booklets. I would have really liked to see cardboard-backed instructions, although as they were, they weren't too rolled up.

The instructions are nice, but as I said above, it would have been nicer if they had packaged them with cardboard backing. Having two instruction booklets was a good choice in my opinion, since it gave me a good reason to take a break from building to get food.

The minidolls in this set are great. The girl, Stephanie, has a nice hairpiece, and the outfit is good-looking as well. The quality of the printing on minidolls is pretty good compared to what I originally assumed. The teacher, Ms. Stevens, has a good hairpiece as well, but I don't like it as much. It also looks a bit odd on a normal minifigure... The boy, Matthew, is very cool. He uses the Skateboarder hairpiece, which works nice on a minidoll, and his skin is in Medium Nougat.

The build is quite good, being one bag per each section of the school. The way the sections are made makes it easy to rearrange them to make the school unique to how you want, which is a feature I think more sets should have. The set also has a lot of stickers to apply, but that's not really a bad thing. I do think a few could have been printed instead of stickers, but it's not a problem either way. 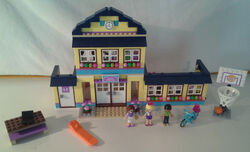 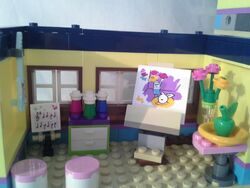 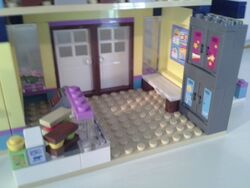 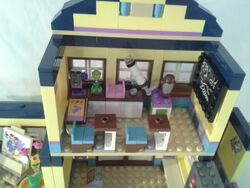 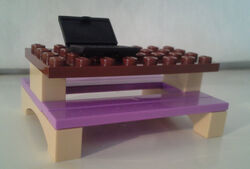 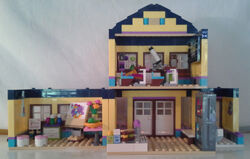 The finished model is quite nice. The light yellow and earth blue look great together, and the set overall is well-designed. The amount of details inside is also quite nice. There is an art/music room, a classroom, a cafeteria and a bathroom, all of which have their fair share of details. Additionally there is a basketball hoop (with a ball) and a picnic table.

This set is probably one of the best Friends sets I've seen from the pictures, but I have yet to experience most of them first-hand. I can't imagine why there are people who say Friends are a "suck-up" or whatever to girls, since there's very little difference in the build or quality of this set compared to a City set. Even if a girl doesn't want to get Friends, there isn't anything saying they can't get another LEGO theme. This is just an option for girls who do want something of this sort. It bugs me when people criticize Friends so much. Anyways, this set is a great model, and has convinced me that I should buy and review more Friends sets. They're great models and have excellent parts in some good colors.

Build: The build is very good, and how it's sectioned by the different rooms is well-done.

Playability: While I'm not really into the reality-type play this set would involve with the average young girl, I can see that this set has tons of great features for the "dollhouse"-like playing a young girl might want.

Minidolls: The minidolls in this set are really nice. The teacher's hair piece is my only criticism.

Parts: The parts in this set are really nice, with the amount of earth blue slopes and tiles, and the amount of light yellow bricks. The dark azur bricks and tiles are also nice. It also has a basketball piece, which was AFOLs who contribute to the "Great Ball Contraptions" at LEGO conventions biggest request from LEGO to bring back.

Price: The set is pretty good for $49.99. It would be even better with a sale, but since I don't have many other Friends sets to compare it to, I think the price of this set is good as is.

Overall: The overall set is very nice, and well-designed. It can easily say a lot about the Friends theme, and is a good LEGO set in general.

Hope you all enjoyed the review! Thanks for reading!

Retrieved from "https://brickipedia.fandom.com/wiki/Review:41005_Heartlake_High/ToaMeiko?oldid=1499777"
Community content is available under CC-BY-SA unless otherwise noted.