Welcome to my review of 6869 Quinjet Aerial Battle! I saved up for this for a while before being able to buy and build it, and I must say that son, I am not disappoint. Due to the massive size of this set, I won't be showing you through the building process at all (You'd rather build one yourself than watch someone else build it amirite?) but rather what comes out of each bag and all the different features that this set contains. Read on!

The box and contents

The contents
Add a photo to this gallery

The box is very nicely detailed, the front displaying the main set picture and the Marvel Super Heroes banner across the top with a city background. The back is more interesting though, showing off the several functions of this set, namely how to position the beams that hold the two parts of Loki's chariot together and the wings of the Quinjet, how to open the back door and the cockpit, how to deploy the drone and most importantly of all: that this set contains flick-fire missiles. Iron Man is also throwing the Chitauri foot soldier (dunno why a foot soldier thinks he can pilot a flying chariot but hey) into the Quinjet main corridor which is apparently the same thing as a prison pod. Seems legit. :P

The most unusual thing about this box though is that there are no "push with thumb to open" tabs. You just have to open it at the side flaps with your fingers.

Anyway, once I get that done I pour out the contents. There are five main bags with smaller bags inside containing all the model's parts and a separate bag with a piece of cardboard to stop the three sets of instructions from folding and crumpling prematurely. This bag also contains the sticker sheet and the free advert comic.

The instructions are unusual because they don't contain any adverts at all. Seriously, none! All three lead directly onto each other and only contain the instructions to build the set, and nothing more. The only possible exception to this is the back cover of booklet 1, which features the usual kid screaming because he wants more LEGO, so it tells him that he has a chance to win some by going on a site and answering a survey. I don't think I need to explain this any further because we've all seen it ourselves at some point. :P

The comic is exactly the same as the other ones you find in the Marvel sets but with four unique pages with a short story. There's no dialogue, presumably so they can print and package the same thing in lots of different countries.

Now onto the actual set. 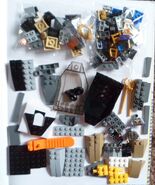 Bag 1 is obviously the first bag the instructions tell you to open, and it contains all the parts you need to build Loki's chariot and the Quinjet cockpit, complete with Black Widow, Loki and the Chitauri foot soldier (I don't call it an "Alien Foot Soldier" on unofficial business, LEGO call it "alien" because they're dum-dums). It also comes with the new brick separator and a few spare parts, including a spare Loki staff. More on the minifigs later, but let's get the chariot out of the way since I finished it at this point, shall we? :)

Loki's chariot of Chitauri design is much better than the Chitauri glider that comes in 6865. It has spikes, what could be landing gear, actual blasters/laser guns/purple things and gold parts. Being a chariot, there's a nice space for Loki to sit in on the back section and command the pilot to go faster. I've already said this, but why is a "foot soldier" piloting the chariot for a hopeful future ruler of Earth? Surely it'd be a general or possibly an actual pilot? Oh well. As also previously stated both parts are connected by two clicky-hinge parts with a purple grill on top.

Bag 2 is where we get started on building the Quinjet's body. The space on the left is where the "control room" is taking shape, the middle is where the drone-dropping TECHNIC beams will be built, and the right is the back "corridor". Again, I've left the spare pieces at the side for you to see.

In bag 3 the walls are expanded upon and a bit of the right wing is built. We also have Mark 7 of the invincible Iron Man. Yay!

Bag 4 contains a lot more TECHNIC parts than all the other bags, for a good reason: Bag 4 is mostly to build the drone-dropping function which is solely TECHNIC, as well as some technical goings-on in the wings. A bit of the right wing is expanded upon and the left wing is added, and we're starting to build the roof. We are now accompanied by the God of Thunder.

Bag 5 is the final bag and so contains all the finishing touches. We have before us... the Quinjet!

Ooh, a big red button! I wonder what this does...

What was now closed...

Opens when the button is pressed.

Another shot of the Quinjet, with Thor on the wing for size comparison

The Quinjet as it appeared in The Avengers - do you think the LEGO version's accurate to the original?
Add a photo to this gallery

As you can see in the finished picture another windscreen is added over the control room, and is strangely not connected to the rest of the model in any way... it sits between smooth bricks. This is so you can remove it easily and play inside the control room. The roof hatch, presumably added so Thor can get in once he's done fighting with Loki on the roof, leads to the back room/corridor, which is the same space as the allocated prison pod. I don't know about you but if I captured a murderous alien the last thing I'd do is let it run free inside a high-tech aerial vehicle, just saying.

Undoubtedly the highest selling point of a set, how are the minifigures in this £70 purchase? Let's take a look.

My first copy of Thor, the God of Thunder in minifigure form. All the printing is accurate to the source material, though personally I would make a few changes. Why are Mjolnir and Thor's arms Light Bluish Grey? In the film and all related merchandise they're more like PDG, and his hair should be a bit darker, probably tan, but LEGO obviously like to do their own thing with these figs. He has back printing and an alternate expression, pictures can be seen on his page.

The Iron Man minifigure included is based on Tony's Mark 7 suit, as utilized in the second half of the film. It's exactly the same as the Mark 6 minifigure but with different printing, as you can see. Again, back printing and Tony's head can be seen at his Bricki page. I expect we'll be seeing a lot more versions of this fig once the Iron Man 3 sets come out next year!

Wait... what? Who's this supposed to be? If Scarlett Johansson saw this she'd give Jorgen Vig Knudstorp a slap round the face. I know Loki was up to no good with his tech in the film, brainwashing Mr Selvig to open a portal to Chitauri space so they could invade is one of his naughty actions, but I don't remember him using his magic to age Black Widow about 50 years in the film. The only possible reason I can think of for adding these facial lines is because the male figures have them too. But please, LEGO, it doesn't work on women. Other than this, the hair's wrong too, in the film she has much shorter hair, which in fact looks exactly like this but in orangey-brown. However, the torso and leg printing is perfect. Let's hope that if Widow sees another LEGO appearance, they do her justice.

As I've already reviewed Loki in my review of 6867, I won't go into much detail here. Unlike in 6867, in this set Loki doesn't have the Tesseract, only his staff (which doesn't look much like the film version either... :/). The printing's spot on, and he has the same rubber gold helmet as all of his other set appearances, though it would be nice if we had a version of him with his hair instead, as in most of the film he's not wearing a helmet. No back printing here as his green cape covers his back, though this doesn't stop Thor from having back printing. Another mystery. :P

The printing seems to match the source material pretty well, but the colours are all off. Nothing much else to say here about this guy. He has back head and torso printing.

Overall, buy this set for the glorious Quinjet and not the figures that come with it. Definitely worth the £70 price mark IMO, because the actual thing is massive, and great fun to play with. Plenty of functions too.

I hope this review has been helpful to whoever's read it, and given you some insight into the set. At the end of the day you make your own decision as to whether to fork out £70 or $70 for a piece of plastic, but I hope I've helped with that. :P

Retrieved from "https://brickipedia.fandom.com/wiki/Review:6869_Quinjet_Aerial_Battle/King_of_Nynrah?oldid=1500500"
Community content is available under CC-BY-SA unless otherwise noted.