The Lord of the Rings(Wave 2)

When Gandalf presented Saruman with the discovery and the location of the One Ring, Saruman revealed his desire for it and his secret alliance with Sauron. He had also shed the title of Saruman the White, Saruman no longer had any loyalty to the White Council, or the Ring-bearer. He tried unsuccessfully to gain Gandalf's allegiance. When Gandalf refused to join with him, Saruman held him captive in Isengard. Gandalf later escaped with help from Gwaihir the Windlord, one of Middle-earth's large eagles, and made Saruman's treachery known to the rest of the White Council.

This set features a part of the Tower of Orctanc. But it cannot connect with it. There are the throne of Saruman, the Palantír with the eye of Sauron. Also there are 2 lamp.

This set with background
Add a photo to this gallery

Saruman’s throne is a black arm chair. There are a small catapult function had been inputted inside the back of the throne that makes Saruman ‘fly’ towards Gandalf.

Saruman fly out towards Gandalf
Add a photo to this gallery

There are an Orb piece that covers the eye of Sauron. The eye of Sauron is just a regular minifigure head but in transparent-orange(or red, I think it is more like red) and printed with an fire eye. The whole stage that holds the Palantir can move in circles by switching the pin in the back of the throne.

The eye of Sauron
Add a photo to this gallery

There are 2 lamp next to Saruman’s throne. But it did not appear in the film. Besides, there are nothing to you can play with it. Perhaps it was just a decoration!

Saruman is originally exclusive to this set. But after a month(July 2013), when 10237 The Tower of Orthanc was released, it no longer exclusive. Saruman was totally got 80% similar to Gandalf the White. They share the same beard and leg piece. But Saruman’s beard got a some spaces which is in grey instead of all in white. For the torso, it will totally be covered after the the beard had been insterted. And Saruman’s staff disappointed many LEGO fans too. Its top isn’t the 4 stick-thing like the top of Tower of Orctanc. It was just a black stick with a white head.

Minifigures
Add a photo to this gallery

For Gandalf, he got a new variation, which he don’t have his cape and pointy hat, and this variation is exclusive to this set. His staff had no changes to the 9469 Gandalf Arrives, just a Brown Stick!

I quite like this set, it is so cheap to have 2 half-exclusive minifigures. And there are 2 small functions for me to play with. I also like the design of Sauron’s eye and the Orb, which was just like the Palantír. There are some exclusive pieces, but not much! But I am quite disappointed about the two minifigures’ staff. I cannot use a word to complain it well. I would just say……that was awful! I hope LEGO will have a better Saurman and Gandalf Staff in future, perhaps in Wave 3?

Fun Fact about my 79005 The Wizard Battle

Back Print of the Minifigures 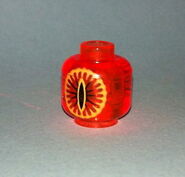 Minifigures Staff
Add a photo to this gallery

24.500 원</span></span>link= 24.500 원 +
Released
2013 +
ShopDescription
Defeat Saruman in The Wizard Battle at The … Defeat Saruman in The Wizard Battle at The Tower of Orthanc! </br>Recreate The Wizard Battle at The Tower of Orthanc, as Gandalf the Grey takes on his mentor and old friend, Saruman, who has fallen under the influence of Sauron while gazing into his palantir. Saruman will stop at nothing to deliver the One Ring to his new master and serve him by helping to conquer Middle-earth. Avoid the spinning palantir’s spell, cast powerful staff magic and send Saruman flying from his throne! Stay away from Sauron’s mesmerizing gaze or risk being enslaved yourself! Includes 2 minifigures with staffs: Gandalf the Grey and Saruman. </br>• Includes 2 minifigures: GandalfTM the Grey and Saruman </br>• Features throne with flick function, spinning palantir with Eye of Sauron and cool yellow lamps </br>• Weapons include 2 staffs </br>• Push the throne flicker and send Saruman flying! </br>• Battle Saruman and stay away from his spinning palantir </br>• Avoid being mesmerized by the Eye of Sauron </br>• Measures over 7" (18cm) high, 4" (11cm) wide and 4" (12cm) deepm) high, 4" (11cm) wide and 4" (12cm) deep +
Theme
The Lord of the Rings(Wave 2) +
Title
The Wizard Battle +
Type
Set +
USPrice
$11.99 +