8093 Plo Koon's Jedi Starfighter is one of my favorite sets. It's designed in such a way that you can easily hold it at the back.
From looking at the pictures, how would you rate it?

Personally, I wouldn't it say it would be the best set ever, but it's way above average.
Functions
The ejection set works well, as long as Plo Koon is in the cockpit, since he has his own molded rubber head, which adds to the friction on the 'glass' and gives him more of a boost. I vastly prefer it more than Anakin's starfighter, because the droid doesn't fall out when you turn it upside-down. I really like the lightsaber clip and it's handy for keeping the lightsaber.
Appearance
I really like the way The LEGO Company has designed it so there are white and blue diagonal stripes, which I really like.
Minifigures
I really like the Plo Koon minifigure, but with a rubber head, the dark grey parts have started to get rubbed out. The droid is awesome, especially since he is exclusive.

Plo Koons starfighter Is a great set! I got it for my birthday this year. I really wanted it because... PLO KOON! Who dosn't love the guy? ABS Plastic head! YAY!!! I really enjoyed the build of the set too! The Blue and white colour scheme is very good.

Plo Koon is a good addition to the Star Wars minifigure collection which has now, many Characters you like but never see in the Movies. That's why the Clone Wars is so genius. It brings you fave characters. The astromech is a nice little cameo minifigure. As rare as he is, It's another great addition to your collection. Finally, Minifigures you need!

A good build. I was soo giddy building the set. The colour scheme is just GREAT! A nice ejection seat isn't bad. And no Flick-fire misiles, YES!!. The wings where slightly tricky though. Lots of thinking and eyes needed (I needed to use my glasses!). The astromech slot is really good aswell.

Buying it will fill your LEGO Star Wars collection!

I knew this set was going to be great before I opened up the box. It may only feature two mini figures but it doesn't disappoint whatsoever. I missed the 7676 Republic Gunship from 2008 so saw this as a great way to get Plo Koon. The torso detail is basic but fits the part well and the head piece is a really nice mould however after a while it begins to lose some detail on it. R7-D4 is the other mini figure and don't let the brown and white mix fool you, it actually ends up looking all right. He doesn't seem to much different from any other droid really except for the colours so don't expect to much from him.

The build of the set is basic if you've built the other Jedi Starfighters but still it has its own unique features in there and is a good short build for a LEGO building pro or an armature.

Once you finish the build you have yourself a nice little ship with an accurate colour scheme that looks great when compared to the one seen on TV. The feature is the launching of Plo Koon which is similar to what was done before with R2-D2 except this one works much better and if you do it well enough it works out all right. Younger kids will enjoy swooshing it around and about but for the older fans it looks great as a display piece too.

Overall it is a nice set an if you have the money lying around then I suggest you pick it up while you can because it won't be long before its off shelves. It is worth the money in my opinion but there are other sets for the same price which may represent a greater value. If your a fan of Plo Koon then you may want this set to add to your collection and combined with 7964 Republic Frigate you could even begin to build you own Wolfe Pack! So this set comes recommended by me and I hope my review is helpful in your decision to buy this set or not.

A fun set for everyone!

When this set came out in 2010 I knew this was a set that I needed to get. Despite not being a huge Star Wars fan I just loved the look and design of this set. I also loved the minifigures and detail LEGO had put into the set. This set adds a great bit of fun when putting it with and sort of scene you have built and is just a great set to have fun with your imagination. 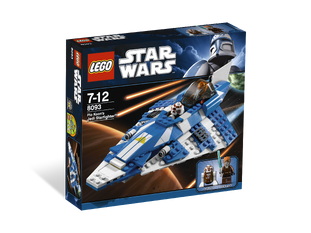 Containing 175 pieces this is a very fun and easy to build set.

When i first saw this set I saw it at $25 (£25.99) which as someone who had trouble saving money was quite expensive. So I saved my money but what are the odds, I got it for Christmas! But if I would have actually bought the set I would have put it at a:

Like most LEGO instructions (manuals) the colour is awful so it makes it hard to understand, "does the 2x4 dark grey brick go there, or does the light grey 2x4 brick go there?" Tell me that hasn't happened to you and I will give you $25 (not really). 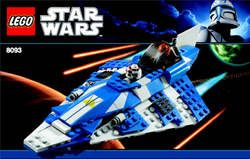 The lucky thing is though about this set the colours are fairly simple so confusion with instructions is very hard for this set. This makes for a nice simple build and not one where you are pulling the hair out of your head. This was very nice to have LEGO take time for these instructions.

The box is a nice simple thing, not to fancy, not to simple which is something I like. Now you won't get someone coming over who sees this fabolous box and has to know every single detail...of the actual set... SO I will say the packaging is great for the set. 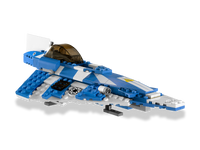 The details with this set are very well done even if there aren't many. I find the main detail to be the underneath legs that help the model stand up when not in use. I also like the Light Saber holder on the side of the ship.

The actual set is very nice in colour with a very nice white and blue. It actually looks like the Starfighter from the movies and is very well done. The back of the model has to "engines" which despite the piece in itself when added to the set it loks very nice. The cockpit for Plo Koon featurres a very neat ejection feature to save Plo Koon in times of crisis. The place for R7-D4 doesn't have this though so I guess in times of crisis it is bye-bye to R7-D4. Overall however I give the set a:

When LEGO does a bad job with minfigures it makes me very very mad. Luckily though LEGO made me very very happy with this set!

Plo Koon has a rubber head which is kind of a bad when you have a little brother who likes to "tug at things." This wasn't that well thought out by LEGO but it is still very neat. The rest of the minfigure is not very popping but still looks very realistic to the charecter it plays so I say it is very well done on LEGO's part.

Though not an "official" type of minifigure this is still very neat. Only four parts which is also nice it to looks looks in charecter. This was very well done especially considering the movable legs which I find just great. The rest of it like Plo Koon is simple but still is very nice and is an accurate representation of it's charecter.

As you can probably tell this is one of my personal favourite sets of all time. Thank you for reading!

I got this set for my Birthday, and it's pretty good. The minifigures are good - Plo Koon is in his first set since the gunship, and this time round the set's quite cheap. He looks cool, and the only annoying thing is that the printing on the rubber can wear off. R7-D4 is new, and is a good addition to a collection of Astromechs. The starfighter itself has an interesting Brick colour scheme, added to by a few stickers (although I would prefer printed bricks),and has a nice, clean design. Unfortunately, it only has guns for weapons, no missile launcher. The thrusters could do with some trans-blue pieces in them, but that is easily fixed. Another disappointment is the ejector seat: Although it works well, it's is rather odd in a STARfighter that flies in SPACE! It also makes his seat look stupid, so I took it out. The lightsaber storage, although useful, is rather conspicuous on the side of the fighter - the storage on the new Mace Windu's Jedi Starfighter is much better. So overall, this set is a good one to add to your collection, but could do with some modifications.

Users who own this set
Retrieved from "https://brickipedia.fandom.com/wiki/Review:8093_Plo_Koon%27s_Jedi_Starfighter?oldid=798837"
Community content is available under CC-BY-SA unless otherwise noted.