I finally received my Werewolf package, and I am surprised at how good this set is, I originally planned to put this set, and Frankenstien's Lab aside, the latter will still be, but this set has amazed me. It is the flagship of the budget sets, JSYK.

The package wasn't dented and ruined like The Swamp Creature, so that was good, the box was actually in good condition, but the instructions - not so much - they had a bit of a fold, but I can forgive that. There were actually actually 2 bags of bricks, I actually thought it would be just the one, but you never know with these sized sets. The build is actually pretty fun, so that is good. The back of the box is pretty simple, usually they show the features, GiD pieces, etc. This set is no exception, the Werewolf looks pretty menacing on the back, in my opinion. One of the funny things is on the side, it shows the PRELIMINARY image, not the OFFICIAL image :P

The set carries 243 pieces, the largest of the budget range sets, and retails here from $29 to $35, I got mine for $33. The box is quite big for a medium sized set, so that interested me. I'm curious to know why the werewolf looks different from his actual appearance on the box art, and how they show the tree smaller, it looks much larger than that once completed.

2 figures, both pretty cool, by MQS really is hated for no reason.

He is a pretty cool figure, a stereotypical werewolf lumberjack, who was in the woods, cutting up some wood, then Wazammy, he turned into, a Werewolf. The head is a new mould, a I'm sure will be exclusive to him for years, and years to come. No minifigure head underneath, just the four insides to hold it in. I was hoping his teeth would glow, but that's probably too complicated for LEGO group to make. Some nice back printing, a torn up Lumberjack suit, I really, really like this figure, and I've only done his back prints. Legs are torn up, blue pants, and easy for a stop motion. I noticed the belt print he has is the same as Frank Rock's, that actually surprised me, as they were only supposed to have exclusive prints. Torn up pants are such a good detail, I love how LEGO is making these monsters, and monster fighters, for that matter. The claws do glow, and look good when they do, which is good, and unlike the Mummy, it glows for longer. An extra claw is also in the set, which you could put on Wolverine, and make him look pretty cool, I guess. I actually thnik The Werewolf is one of the best done figures in MF out of the monsters, up there with The Swamp Creature, Lord V and The Zombies. Nice figure, a great addition to my collection. 4.5/5.

An underrated monster fighter minifigure, and people put way too much hate into this guy for no reason. Probably my least favourite of them, but I still like the character. All of the MFers are good in their own way, Frank Rock for his nice looking prints, Rodney for his robotic leg, and how dashing plastic can be, Ann Lee because we need more females, Jack McHammer because he's Jack McHammer :P. Major Q is a good figure for his steampunk head and epic blunderbuss gun :3. I like his hunting hat, a think you call it a pith hat, or a sun helmet hat. I was hoping he would be from Africa, and I guessed it before I saw his bio, so you can now say CzechMate is a genius. His prints are very nice, and he looks like a born hunter, well, a plastic one :P. His hat does keep falling off, it must be a new version of it, it is too slippery and gets off too easily. A bandoleer print on both is front and back is very nice feature, two werewolf claws printed on his legs, and a bag on the other, on his body print, a map is being held onto him with the bandoleer. Looks really good, and I just love how LEGO made him, his prints make him look really, really good. Thpugh he may not be my favourite monster fighter, he's my favourite ever hunter minifigure. His blunderbuss is pretty epic too, gold scope and a gold fez (Matt Smith likes them :P). The dark brown is perfect with the gold, which is the same gun used in Dino. Very good fiure, 4.5/5. 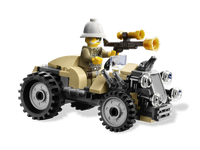 Very cool looking vehicle, and of of the better MF cars. A sliver frog on the front is one of the best car ornaments ever, who doesn't want one? :P. Four revolvers are used as the engine, which I actually find funny and cool at the same time, 4 tap pieces with a 1x1 trans-white studs are used in this set, on the front as lights, as LEGO always does, but doesn't look as bad as usual. The wind-screen is a wall corner piece is trans-white, which I guess looks better than a large wind screen. There is enough room for MJS to either stand, or sit down in the car, and also a clip for his gun, so he doesn't have to multi-task and get called up by the police :P. Two larger wheels at the back are pretty kewl, and I really like it, but I wish they used different wheel rims. Cool car, 5/5. 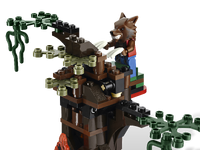 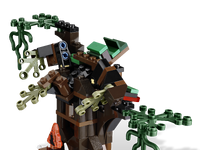 The tree is incredibly detailed, and is home to the only real feature. Lots of techniques to make a tree is used, and I really like it, inside the tree are 4 trans-orange 1x1 pieces, which, I think is supposed to be the trees juice, or the Werewolf's house :P. The amount of brown pieces really annoyed me, especially when building, when your as blind as me, it is hard to see it, even with my glasses, but luckily all the pieces stayed in one colour for the piece. The area where the moonstone sits is supposed to lure the Major, and be a temptation, thinking he got the easy go. But why can't monsters be monsters? Is it that hard? The tree feature is pretty nice, on the right you'll see the affects of it, and the werewolf can go as far as 80cm, if you flick it hard enough, like I did, though make sure you put his claws up when using the feature, or else he'll get stuck, and hold onto a part of the tree, like its plate, for example. The moonstone is my least favourite, I just don't think a stone would be encrusted like that. it just seems odd to me, this is the only one I don't like in some way, it's probably just me,but it doesn't seem original, the Mummy one has an Anubis eye, the Vampyre's is a bat, and they look much better, even teh Zombie one is better, and that one is the same type of thing. However the bone pieces on the sides of the moonstone area are much better items. A few brick yellow pieces are used on the tree, as well as larger dark green tree limb pieces, with has sea weed used as foliage of the tree. Very cool tree, and can be used for things like Endor Star Wars mocs. 5/5

Very cool set, and worth the money, though I'd like it if it had another small bush, or a small hut for the wolf, and a dog, because on The Swamp Creature, they put a frog and a fish, so why not a dog or two? This is definite buy if you're on a budget, or want to get in on the MF sets if you aren't sure. This set actually changed my view on the sets, now I see them as probably better sets, as they bring back old features, and really do well editing them to fit well into their surroundings.

Very good set, gets a A+

Retrieved from "https://brickipedia.fandom.com/wiki/Review:9463_The_Werewolf/CzechMate?oldid=1500253"
Community content is available under CC-BY-SA unless otherwise noted.