I wasn't planning on getting this set any time soon, but I had enough money to get this and the Vampyre Castle, Hearse too. The set has a smaller price tag than LEGO's $120, I got mine for $99 (woohoo!).

The figures are all good, I've reviewed them all before in previous reviews, so I'll do smaller reviews.

Good figures, though with the legs they just look odd, I preferred the 2x1 flat piece with a 2x1 brick. The new shroud is cool, I like it. Better than the old one.

Each LEGO theme has a set out: The leader, the heavy utility weapon man, the crazy old man no one likes, the female companion, and the teenager, Frank Rock. Nice printing on him, but using revolvers is boring me, I really want the teenager to be less...violent.

Building the Locomotive was fun, the other bits were...meh. Plane was fun. I do like the brick separator, and the instructions in with cardboard to keep them flat, they should do that with any set over 400 pieces.

Very cool plane, though lacks room for both of them. I actually think the flicks are dumb in this set, they'll go right through the train an the ghosts.... . The vacuum weapon is hilarious, and amazingly good feature XP. Dark red fits the plane, though in the preliminary images, it was shades of blue. I do wish the propeller worked better, but hey, you get what you get, it's not like I can't customize it to make it look extremely awesome ;). 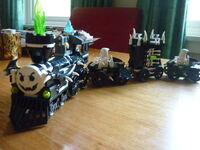 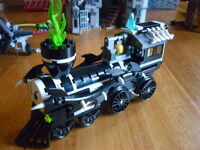 The locomotive part is the best carriage part, I just loved building it. So much fun, and with the cowcatcher on the front of it, It's just so good. Inside the driver's area is a little door displaying the engine, with trans red cones and a trans red feather, which really should be green, like the exhaust. Lots of GiD pieces on the first carriage - 5.

The carts are lot like roller-coaster carts, with the pull-it-down bar to hold the figure in. The flappy wing feature is pretty cool, when it moves, there is a piece, from BIONICLE which blocks the wings form moving, but with the wheels allows it to move up and down. The wings are really good pieces, though. I htink there is about 4 GiD pieces.

Prison Carriage really annoying me to build, with the annoying wall pieces, that flap off if you don't put the roof on properly. The carriage is also to small, in my honest opinion, barely enough room for a figure. I used my ghost from 30201 in it, as an "Insane Ghost", kinda like in Doctor Who with the Asylum of the Daleks.

This is actually my favourite set so far, and seems more ideal for purchase, especially if you're going into a store. I'd recommend it only for 10+, really, some tricky bits, and idea won't make any sense to a 7 Year-old. Pretty good Value for Money, $99 for 700-and-something pieces, around the same amount of pieces as Jabba's Palace, which is $100 more. I'd recommend this over the castle, for the amount of fun you'll get, and the Castle's figs ultimately all come in different sets, cheaper ones too, mind you.

(I'll add my own pics later)

Retrieved from "https://brickipedia.fandom.com/wiki/Review:9467_The_Ghost_Train/CzechMate?oldid=1500259"
Community content is available under CC-BY-SA unless otherwise noted.