"For the King!"
―Éomer before charging the Uruk-hai

For my first set in [how many] months, I'm very impressed. The set depicts the scene in The Two Towers where Éomer and the Riders of Rohan, also known as the Rohirrim, charge down a very steep mountainside on horseback at the Uruk-hai, who are attacking Helm's Deep. Mind you, the Rohirrim are more than a couple of men. more like a couple thousand. But if they included more than two men of Rohan in this set, they'd have to change the name to "Éomer's Army" or "The Rohirrim vs the Uruk-Hai" and raise the price, as it already has six minifigures. And believe me, the price is quite enough as it is. 30 USD is a bit much for a set of this...what's the opposite of magnitude? Minitude? Anyways, you get what I'm saying.

I now present what you actually came here for...a detailed review of the set.
*Ahem*

The Box and Instructions

The box art depicts, inconceivably, the set. It has the defensive wall with one defender and a catapult, with the Uruks' giant ballista firing its bolts at it. (For those of you who don't know, a ballista is basically a giant crossbow and bolts are the giant "arrows" it shoots out.) Éomer is on his horse attacking the Uruk-hai. Now, the box is a bit misleading, as it makes the set look larger than it actually is. There are very few things about the instructions that are noteworthy. They were annoyingly folded in half, as they usually are, but the main thing about it is the colouring. The manuals are known for making black pieces look grey and such. Not this time, though. Here, nearly all the colours in the manual are correct, which I really like. The one exception being the small earth green slope pieces - they are bright green in the manual. But it's a relatively minor problem.

The ballista is a fun build and comes with some unique pieces, some of which I've never seen before. No flick-fire missiles, thank the Grey Havens, but instead a piece that, when you push it forward, it launches both bolts at once. They don't go very far, but it's fun nonetheless. I also like the smooth 1x4 pieces that have printing of wooden boards on them. A nice addition, and good for floorboards too.

The only real con to the ballista is the fact that it looks a bit unfinished. The top of it could use some finishing touches, as can the sides, just behind the movable grey pieces that stick out at the sides.

This part of the set is also very satisfactory. It was relatively fun to build, although I might have used different parts for some sections, and came with some nice pieces, like the piece that has actual brick designs engraved into it instead of printing. It also comes with several light grey and sand green 1x1 bricks, which usually aren't as plentiful as some other pieces. Some other cool and not so abundant pieces include a small catapult, a stairway, a torch and two nice flags, one gold and the other dark green.

The minifigures of this set are astounding. The detail of the printing and the designs of the armour are spot-on, which I really like.

Four Uruks are included in the set. Each has the same torso and legs, with very nice armour printing. They have dark grey armour covering their stomach, with what appears to be leather over their chest, back and legs. Several rivets dot their armour symmetrically. This printing is continued on the legs - and on the back - of the minifigures. The faces are double-sided, with one side the normal Uruk yellow-eyed, red-faced snarl and the other similar, but with the white hand of Saruman printed on as well. Without any helmets, armour, weapons or in one case, hair, the uruk-hai are all identical. I don't have a problem with it, as they look really good, but I thought you might be interested in that fact. The armour and weapons are dark silver. The helmets are a new mould, very accurate to the movie. They have a crest on top, an opening for the mouth and a slit for the eyes. Two spikes jut out next to the mouth area. The swords and shields are also spot-on, with the swords being flat and rectangular with a perpendicular spike at the tip and the shields with two spikes at the bottom and a circular chunk missing from the side. Two Uruks come with helmets, armour and giant axes, one with a helmet, sword and shield and the last with black hair and a sword and shield. Overall, awesome minifigs.

Éomer and the Rohan Soldier are also very good minifigures. The helmets are very nice, especially Éomer's, which has intricate gold designs. They cover all but the face, naturally, and have a crest on top. A piece covers the "nose" and two parts of the helmet extend over the cheeks as well.

I love the printing of these two. Éomer's is of a brown shirt with intricate white designs over some chain mail. He has a twisted and knotted belt with a gold buckle and printing of triangular chain mail on his legs. He wears an earth green cape, a colour not usually seen in minifigure apparel. The other human has the triangular chain mail underneath leather on his chest, with a brown strap running diagonally across it. He has a belt with a grey buckle. Both of the humans' faces are double sided and have ginger beards. Éomer is very recognizable; they did a good job with him. One side has a neutral expression and the other depicts him in a yell of fury. The Rohan Soldier also has good facial printing, though not as cool as Éomer's. then again, when is anybody as cool as Éomer?

Although the horse isn't a minifigure, technically, it's still one of the "good guys" so I'll review it too. I'm obsessed with the new horse design. Absolutely amazing. The heads are sculpted perfectly, the neck can move up and down and the hind legs can bend back to make the horse rear up. LEGO has outdone itself with all of these new moulds and printings. And speaking of new moulds, I've yet to describe the new spear piece. It looks very cool and has a silver tip on a brown shaft. The only problem with it is that the silver tip is some rubbery stuff...I liked the old-fashioned spears where it was nice hard plastic. Maybe too may kids poked their eyes or something. Although a rubber tip isn't going to make the pain any less if you do poke yourself in the eye...

All things considered, this is a great set. Sure it's a little pricey, but you get six awesome minifigs, some cool new pieces with the two models and some handy extra pieces. I'd definitely recommend this to anyone. I am right now, aren't I? :P

Éomer's helmet comes in a little bag of its own :P 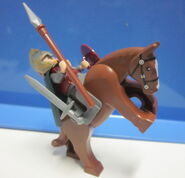 And what would a horse be without its rider? (Better off) 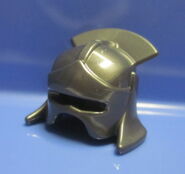 The Rohirrim helmets (Éomer's on the right)

Retrieved from "https://brickipedia.fandom.com/wiki/Review:9471_Uruk-hai_Army/Jeyo?oldid=1499750"
Community content is available under CC-BY-SA unless otherwise noted.