I ordered this set for my birthday (Feb 7th) and got it about 2 weeks later. Incredible set, well designed, but those flimsy wings...

The minifigures were fantastic choices, as I did not own any of them prior to building the set

One of the best astromechs I have. Well designed. I like the new "head" piece. Uses a new version of black, slightly metallic. The fact he's exclusive to this set is another reason to buy this set. The only down part is the fact, like other astromechs, they don't have a sliding head feature yet, but hopefully, in a few years, there will be a new way :D Total: 4/5

Very, very well made. I was hoping for a new cap piece, but you don't get everything. He is maybe a bit plain, but the torso design is very accurate. I think it's a good figure, but isn't the best one. Main highlight in the figure would be the torso. Back printing is always something LEGO miss out on, so you have to savour when they do print it. 3.5/5

Good design, dual-faced and well designed torso. I'd say it's the best minifigure in the set, just beating R5-J2. The helmet piece is just great, so well designed, every small detail noted. The utility belt printed on is a good addition too. Total: 5/5

Very, very well designed. New face is a good feature, and something to be happy about, and great for custom Jango Fett's :D. As you can see in the image, the usual torso piece. Helmet is just fantastic, a new mould, and (as mentioned) new head piece is simply awesome. At the same time, it is slightly too big. Total; 4/5

The TIE Fighter, of course is the main build. Comes with 2 (flimsy) Flick-fire missiles, a new "hatch" print aswell. The set consist mostly of gray and light gray pieces. Black and light gray on the wings, aswell. Lots of detail in the set, and also introduced several new elements.

The wings may be well designed, but lack stability, they managed to fall of twice, both when I was making this review :P. The way they made SNOT technique is incorporated in to the wings is very smart, making it slide for take-off :D. The fact the wings aren't stable isn't very good, they wobble alot. It also takes ages to build both of them :/. The flat piece in the middle of the wings, however just attempt to keep it together, but does it work? Not completely, sadly. 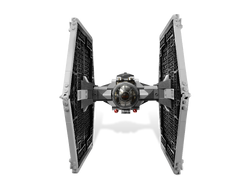 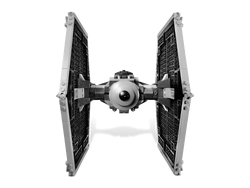 Good design inside, but heavily lacks creativity, nothing liek prints on the wall or small antenna pieces as controls, and feels kinda pointless without it.However, I did modify it slightly so it seemed a bit more enjoyable and fun. The cockpit screen is very good, and gives the warn TIE Fighter theme to it (as it should). The overused red pieces for Classic Star Wars sets also included as "controls". 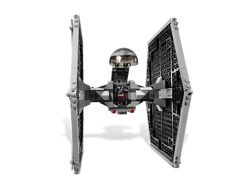 The fact it is AU $90 wan't very impressing, with a piece count of only 413 that is kinda a rip-off, but the fact the set is so good does make up for it. Having ordered this set online saved a lot of money. But I'm very disappointed at the prices for sets in Australia. 413 pieces must mean around 10 or 15c per piece. But it's no where near the highest amount of money I've paid for a LEGO set, the top currently being 7066 Earth Defense HQ ($145) and 9468 Vampire Castle (Around $135). The reason why it's so expensive may be because of the new moulds for minifigures and the set.

In total, a very good set, but the price definately will bring down the buyers. They will obviously be missing out on a stellar set.

Retrieved from "https://brickipedia.fandom.com/wiki/Review:9492_TIE_Fighter/CzechMate?oldid=1500256"
Community content is available under CC-BY-SA unless otherwise noted.