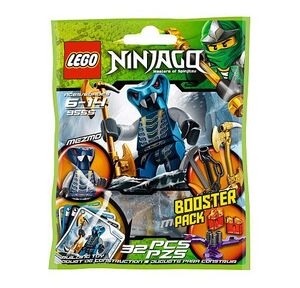 This set is awesome! Mezmo is exclusive to this set, and the weapons included with it are pretty cool, and the cards have great abilities. 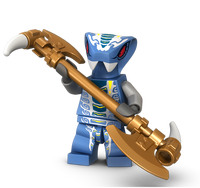 As I said above, Mezmo is exclusive to the set. He is extremely detailed. He has a dark blue head with red eyes. The top of his head has an intricate gray and yellow design. His body is also dark blue, with a very detailed gray and yellow design, with swirls at the end of each design. He has light gray arms with dark gray hands. The design from his body continues onto his dark blue legs.

His pickaxe is gray with two sharp, curved ends on both sides.

I don't know what to call this weapon, honestly. Anyway, the weapon is black with the same chain used on Jay's Nunchucks of Lightning. At the end of the chain is an orange spike. The part where the minfigure holds it is a black antenna.

The purple spikes included with the set are similar to snake tails.

The two Bricks included with the set are red, with orange 1x1 sloped transparent bricks.

Mezmo's Character Card shows Mezmo with his Golden Axe, in what appears to be a blizzard, with snow in the background. His element may be Ice, as he is standing in snow.

Builds a complete spinner until a player wins. Oddly, Mezmo cannot use this card. He can, however, use it with the card Inner-Peace, included with him, which adds 300 SP to all four powers. Without the Inner-Peace card, Mezmo cannot play Snake Whips.

Add SP 300 to all four of your powers until a player wins. Immediately play another card.

Opponent cannot play cards or use face-up crown cards until a player wins.

Choose one face-up card played by an opponent. Use it until a player wins, then remove. (LOL, Slithraa is holding actual Ninjago cards in this picture)