Series 8 - Vampire Bat. So, yeah, nice minifigure, and there is a slight story to this, I guess. 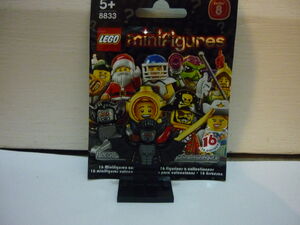 So, I went to my most local K-mart, and noticed they had a load of Series 8 minifigures, however I didn't have enough money, but I absolutely knew it was a vampire bat, but $3 short, I only had $2. Bit disappointed, I put it behind a bunch of TECHNIC sets, because I knew no one would look there ;)

Four days later, I went back, looked behind, and found it, it's probably a miracle, really. I had my $5, bought it, and was happy to see his fuzzy printed head.

This is not a figure to get if you're a big fan of Monster Fighters. I can't see any other use for this figure other than using it in 9468, as another man bat. I'm using mine, of course, because I'm a Monster Fighters fan, and because it's cheap, and something to enjoy for $5. Some nice face prints on him, devilish red eyes, and those fangs :3. I actually don't understand why the Manbats have fangs, Vampire bats are the only ones who it makes sense for. :S. The torso prints aren't bad, big fluffy mane thing. Reuse of the manbat wings, which I like.

Again, only buy if you're an MF fan, or want a cheaper way to get one of these bat people.

Retrieved from "https://brickipedia.fandom.com/wiki/Review:Vampire_Bat/CzechMate?oldid=1160457"
Community content is available under CC-BY-SA unless otherwise noted.