Revolutionary Soldier is a Minifigures Series 10 minifigure released May 2013.[1]

The Revolutionary Soldier is based off of a colonial soldier in the American Revolutionary War. He wears a dark blue uniform with crossed white straps over it. The button lining of the coat is red, and the coat is secured at the top with a red bow. A white shirt can be seen under the coat. His face is stern and concentrating. He has an exclusive wig mould, with a dark blue bow securing the ponytail in the back. He has plain white legs and carries a brown flintlock musket. 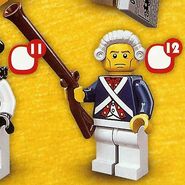