Rex is a Power Miners minifigure introduced in 2009. He is the engineer of the Power Miners and he invented most of their machines. He is seen wearing the new, silver, heat-resistant armour in two of the 2010 line-up of sets. He has been given two versions, one with some scars, and one with a metal plate in his head. The one that only has the scars has more often been associated with Rex.

The first variation of Rex features the standard blue Power Miner helmet (Part 30325) as a head accessory. He also has a grumpy expression along with several scars and some stubble facial hair printed on his face. His torso is like most other Power Miners torsos, however, the printing on his torso uniquely features a black picture of a Bomb in the centre, a pair of plyers hanging from a pocket on his right and a magnifying glass hanging from a pocket on his left. His arms are yellow (representing a sleeveless top) with his hands being grey (representing gloves). His legs are the same as all Power Miners a blue with a black hip piece.

The second variation is almost identical to the first. However, the printing on his face in this variation shows Rex to be more cheerful/confident with a metal plate on the right side of his face. He also has no stubble facial hair along with less scars.

The Heat-resistant armour variants torso and lags are identical to other Power Miners, being a grey torso and legs with silver armour printed on them. The Heat-resistant armour variation featured both of Rex's faces in two different sets. The helmet is the same as the 2009 version (Part 30325), but is coloured in silver. The helmet also bares the accessory of a visor which looked very similar to the visor introduced in the Ice Planet 2002 theme, but with the exception of no antenna and being silver coloured.

Rex was hired as the Engineer for the Power Miners team to investigate the severe Earthquakes happening above ground. He worked at a geothermal power plant near the center of the earth and designed and drove the majority of the vehicles in the theme. According to a short biography, he has a constant rivalry with Firox, who enjoys destroying his creations. He also gave Brains his nickname when they first met. 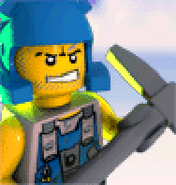 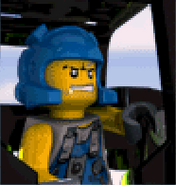 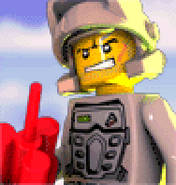 The minifigure's back printing
Add a photo to this gallery

Retrieved from "https://brickipedia.fandom.com/wiki/Rex_(Power_Miners)?oldid=1682182"
Community content is available under CC-BY-SA unless otherwise noted.