Brickipedia
Register
Don't have an account?
Sign In
Advertisement
in: Class 4 articles, Video game only minifigures, Articles that need to be Brickified,
and 5 more
English

The Riddler Goons are characters created by TT games that act as average enemies in LEGO Batman: The Video Game and LEGO Batman 2: DC Super Heroes.

They serve the Riddler, acting as his goons, minions and henchmen. They are mostly tasked with stopping Batman and company from reaching their destination but also serve as bodyguards for Riddler and also as laborers to do the heavy lifting and grunt work. They are armed with guns but will also attack by punching their opponents if they get close. This is different from the Riddler Henchmen who uses guns as primary weapons at all times, only attacking in melee if directly approached.

These goons resemble real LEGO minifigures. They wear green, blank shirts and grey trousers with black caps. They are also depicted wearing black sunglasses and have a slight stubble.

In LEGO Batman 2, the goons have received a facelift. They now wear a green jacket with yellow question marks spread across it along with matching green trousers and a black cap and black gloves.

In LEGO DC Super-Villains, the goons have further advanced their outfits and they now much more similar to the Riddler. They wear a green jacket with black question marks on it, a light green jumpsuit with a purple question mark on it under the jacket, complete with purple trousers, purple cloves and a purple domino mask. They also no longer wear their black caps from before. Both male and female versions exist. 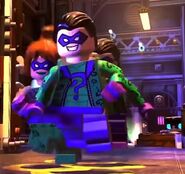